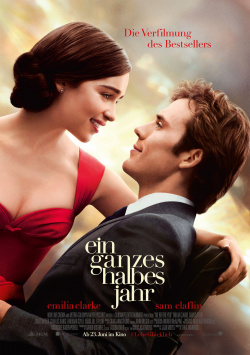 Louise Lou Clark (Emilia Clarke) is a fun-loving, carefree woman. There is seemingly nothing that will make her lose her optimism. Even when she loses her job at a small caf<x>Ampersand</x>eacute; she doesn't give up on herself. But the new job suggested to her by the employment office puts even a cheerful soul like Lou to the test: she is to look after wealthy banker Will Traynor (Sam Clafin), who has been confined to a wheelchair since a serious accident two years ago. Will is filled with bitter cynicism and makes Lou feel at every available opportunity that he doesn't want her around. The fact that she doesn't let this discourage her and eventually stands up to him, however, impresses him greatly. And so a very special relationship slowly develops between the two, which is put to the test when Lou realizes why she was really hired.

A Whole Six Months was the most successful novel of the year in 2013, selling 1.2 million copies in Germany alone. Worldwide, British author Jojo Moyes' book was translated into 32 languages and sold over 5 million copies. It's no wonder that a studio was quick to secure the film rights to the story. The story is not particularly original, but it is reminiscent of a mixture of "best friends" and the Julia Roberts "love story". But the story went down very well with the mainly female readership, despite familiar clichés and a good portion of kitsch - and this will be no different with the successful film adaptation.

The film benefits from several fortunate circumstances: First, there's the fact that Moyes herself wrote the screenplay. She herself decided which parts of the novel were taken directly, and which were altered, abridged or deleted. The dialogue, while not award-worthy, reflects the character of the book very well, adequately bringing the beloved characters of the novel to life. The mix of drama, romance and a pleasant dose of humour is absolutely spot on and ensures that the whole thing never gets too sappy. The story is simply beautiful and pleasantly restrained towards the end. This allows the audience's emotions to really flourish, which is guaranteed to result in quite a few tissues being consumed at every screening.

The film's biggest plus point, however, is definitely the cast, most notably that of Emilia Clarke as Lou. Clarke plays a character here that is so far removed from her strong role as Deanerys in Game of Thrones that you don't feel like you're watching the same actress for even a second. Although you occasionally get worried that her eyebrows might take on a life of their own, you're infected by the endearing charm and radiant joie de vivre she exudes here, so you can't help but like Lou. And Sam Clafin also delivers a thoroughly believable performance that really gets to the heart, especially in the second half of the film.

Surely, there's no particularly profound entertainment on offer here. Beautiful landscapes, likeable people and a story purposefully aimed at the tear-jerkers are the not exactly surprising ingredients of a charming, but still conventional production. But all the familiar elements have been so successfully mixed together here that the result is a simply beautiful cinematic experience that goes to the heart, that makes you laugh and cry and that celebrates the beauty of life and love. And for that, the bottom line is a very clear: Absolutely worth seeing!

Cinema trailer for the movie "A Whole Six Months (Großbritannien 2016)"
Loading the player ...