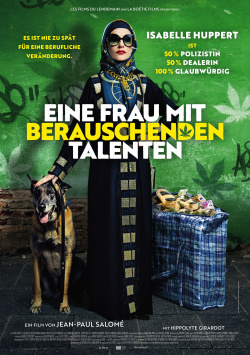 A woman with intoxicating talents

Patience (Isabelle Huppert), an interpreter, works for the drug squad in Paris. She translates intercepted phone calls from the drug scene for the police. This helps with the investigation, but is not particularly well paid. So far, Patience has done well with the money and has even paid off her late husband's tax debt. But when she can no longer afford to care for her seriously ill mother, she realizes she desperately needs more money. That's when fate comes to her rescue. For when she learns that the young man currently driving a huge shipment of drugs to Paris is the son of her mother's nurse, she decides to go against her professional ethics and warns the man, who then hides the hot goods. Now Patience sets out on her own to find the drugs and distribute them among the people of Paris. In doing so, she shows amazing creativity, which not only earns her a lot of money, but also the wrath of the actual owners of the drugs. And then there is her lover Philippe, who, as head of the drug squad, is getting closer and closer to the mysterious "Madame Hasch".

With "A Woman of Intoxicating Talents", director Jean-Paul Salom&eacute; has staged a wonderful comedy in which a woman must prove that it's never too late for fundamental change. Like the main character in the 2013 comedy "Paulette", a woman in financial straits gets into drugs rather by accident and rises to become a successful drug dealer. But Salom&eacute; has not directed a clumsy "Paulette" knock-off here. Rather, his work is - despite some similarities - completely independent. The production thrives on the charm of classic comedies of confusion, spiced with quirky characters and delightful wordplay.

That the whole thing works so well, however, is also thanks to lead actress Isabelle Huppert, who plays her role with great wit and aplomb. Huppert embodies the transformation from the rather reserved interpreter to the ice-cold, cunning dealer with bravura. The rest of the ensemble admittedly pales a little beside her. But all in all the other actresses leave a very good and often charming impression. Their play gives the film the necessary lightness, which helps this comedy also over its otherwise rather conventional production.

Sure, one could now criticize that the film completely ignores the consequences of the drug trade of the interpreter. That Patience is also downright glorified for her criminal actions. However, one should not forget that the film is not a realistic social drama, but an exaggerated comedy. The absurdity of an unassuming interpreter working for the police turning the drug scene of Paris upside down is just incredibly funny and very original. And that's why you can't really fault the film for any criticisms. "A Woman of Intoxicating Talents" is a light cinematic pleasure that simply puts its audience in a good mood - and that's exactly why it gets a well-deserved: absolutely worth seeing!

An article by Sebastian Betzold

Cinema trailer for the movie "A woman with intoxicating talents (Frankreich 2020)"
Loading the player ...