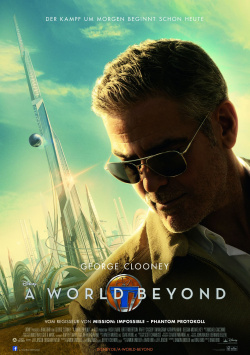 All along, Casey (Britt Robertson), the daughter of a NASA engineer, has shown a special talent for all things technical. And so she uses her skills to manipulate the demolition of the rocket base her father (Tim McGraw) has long worked on, hoping to save her dad's job. Too bad she gets caught doing it and is taken into custody by the police. When her dad picks her up from jail, among her belongings is a strange pin Casey has never seen before. When she touches the pin, she suddenly finds herself in a futuristic world that disappears as soon as she lets go of the pin. But just when she thinks things couldn't get any crazier, she's attacked by very human-looking robots, rescued by a little girl (Raffey Cassidy), and taken on a dangerous journey. Which leads her directly to disillusioned scientist Frank (George Clooney), the only people who can take Casey to the place where the girl can save the world from certain doom: Tomorrowland!

A World Beyond is the second live-action film from Academy Award winner Brad Bird (Ratatouille, The Incredibles), following Mission: Impossible - Phantom Protocol. The fantastic journey Bird takes his audience on in this entertaining adventure is a mixture of mystery and science fiction, whereby especially the part of the film that takes place in the future at first seems as if Brad Bird is designing another of the currently so popular dystopias for young viewers here. But while there may be some obvious parallels to Panem & Co - a teenage heroine becomes a beacon of hope for humanity - A World Beyond tells a story all its own, set apart from other genre works if only by the fact that most of it is set in the present day, and there's plenty of humor to go along with plenty of suspense.

The brief visit to Tomorrowland that viewers are allowed to accompany young Frank on at the beginning of the film paints a picture of a classic utopia of a world without wars, where humans seem to live in perfect symbiosis with technology. But this future is in danger because of what is happening in our present. Wars, environmental disasters, corruption, exploitation - all of these could lead to mankind wiping itself out. Why Casey, of all people, can prevent this from happening, and why man has forgotten how to fight for a happy future, may seem like a very striking feel-good message after all, and one that isn't exactly subtly conveyed, especially in the final act. No wonder, since A World Beyond is unmistakably a Disney production. But if you're now worried that there's a lot of kitsch and pathos being served up here, you can rejoice: Brad Bird has managed to stage his children-are-our-future message with a heavy dose of irony and plenty of good showmanship.

Though the film isn't quite the big effects fireworks display that the trailer might suggest. Tomorrowland is only visited in about 30 minutes of the two-hour-plus running time. While there are plenty of minor and major effects in the scenes set in the present as well, they are rarely as prominent as they are in the opening minutes in the utopian version of Tomorrowland. The exceptions are the action-packed scenes in a store that is paradise on earth for all comic book and Star Wars fans, the destruction of which in the course of a fiery confrontation is likely to bring tears to the eyes of many a nerd (like the writer of these lines), as well as a wild robot fight in Frank's den. But overall, Bird holds back enough in terms of CGI effects to allow the story and its characters enough room to unfold. And the film clearly benefits from this in the end.

As a result, the actors are not upstaged by the effects and can even offer something like genuine acting performances. Most notably, lead actress Britt Robertson, the ever-reliable George Clooney and new discovery Raffey Cassidy leave a consistently positive impression. Especially when the script turns its attention to irony-tinged dialogue, the fine ensemble is simply fun to watch.

Overall, A World Beyond is not Brad Bird's best film. It lacks the final kick to make more out of the beautiful story and excellent production than just very good entertainment for the whole family (although the age rating of 12 and up has its justification). But even if the big wow effect is missing and the imaginative adventure is certainly not one of the biggest highlights of the cinema year, a visit to the cinema is nevertheless, especially for friends of the American entertainment cinema of the Disney brand and for all fans of the films of Brad Bird bottom line yet: Absolutely worth seeing!!!!