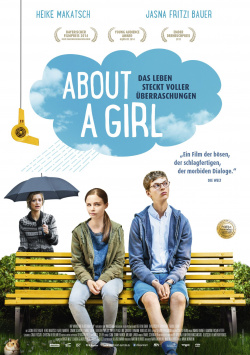 Life is an Asshole! At least that's how it feels to almost 16-year-old Charleen (Jasna Fritzi Bauer). Her classmates annoy her, her mother Sabine (Heike Makatsch), a power-seller at Ebay, is dating her teacher Volker (Simon Schwarz) of all people, and her father never actually shows his face. Fascinated by everything dead - from rock stars to insects - Charleen decides on a whim to put an end to her dreary existence. But that only ends with a sore neck and a forced visit to the therapist. Here, of all places, Charleen meets Linus (Sandro Lohmann), the biggest nerd in her class. As it turns out, he too feels like he doesn't really fit into this world. While Linus is a bit too quirky even for Charleen, he brings something into her life that she thought was long lost: Joy. An unusual friendship develops between the two, which could actually become something more. But as I said: life is an asshole...

With his debut film About a Girl, director Mark Monheim has staged a nice black comedy, which, however, tries a little too tightly to be more original than it actually is. Teenage misfits working in a funeral home were last seen in Better Than Nothing, and in Coconut Hero the world-weary teenage hero also has a very special relationship with such an institution. The lovable, somewhat weird grandmother, with whom the main character has a very special relationship, is also known from another film with Jasna Fritzi Bauer (Ein Tick anders) and also the preference for dead rock musicians like Kurt Cobain is a cliché that is served all too readily. In addition, Jasna Fritzi Bauer is once again cast in a role that is strongly reminiscent of her characters from Outland Park and, to a certain extent, Ein Tick anders. No question, she plays wonderfully in all these movies and is not without reason one of the best young talents in German cinema. Nevertheless, her acting here doesn't seem quite as fresh and surprising as it was in her first films.

Monheim squeezes his comedy into a corset that it doesn't even need. For there are enough ideas that reveal not only a certain originality but also a pleasant non-conformity. Charleen's sessions with her therapist, for example, or the friendship between the morbid girl and the quirky nerd that slowly develops into something quite wonderful are full of quite wonderful moments. But some of the dialogue just seems too contrived and some scenes too concerned with whimsicality, so they lack the looseness they would need to really work. But the film can counter this with two very strong assets: two extremely talented and likeable young actors.

It is then also thanks to Jasna Fritzi Bauer and Sandro Lohmann that the film works even in the somewhat bumpier moments. And also the really nicely drawn friendship between Charleen and her best friend Isa (Amélie Plaas-Link) lift this coming-of-age comedy a bit out of the usual one-size-fits-all. Even if the whole thing had the potential to be a much better film and the production should have been a little more courage to be independent, About a Girl has become a really worthwhile piece of German cinema, which viewers who like quirky stories about growing up can definitely enjoy.

Cinema trailer for the movie "About a Girl (Deutschland 2014)"
Loading the player ...