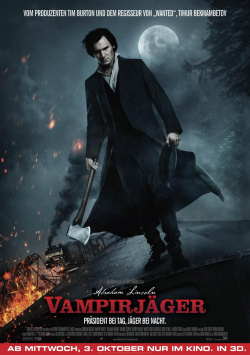 As President of the United States of America, everyone should know the name Abraham Lincoln. His political work, his influence on American history and his assassination belong not only in the United States to common general knowledge, which is underpinned not least by the fact that these events are also repeatedly taken up or mentioned in movies or TV series. What few people know, however, is that Abraham Lincoln had a second job that was no less important for saving his people than his presidency. Luckily, there's Wanted director Timur Bekmambetov, who now introduces us not to Lincoln the President, but to Abraham Lincoln Vampire Hunter.

After witnessing his mother murdered by businessman Jack Barts (Marton Csokas), a bloodthirsty vampire, the young Lincoln vows revenge with a high sense of justice. Maturing into a young man, it seems the moment for Lincoln's (Benjamin Walker) retribution has finally arrived. But his attack on Barts backfires and only at the last second can he be saved by the mysterious Henry (Dominic Cooper). The latter reveals to him that he has long been roaming the countryside as a vampire hunter and would be willing to teach Abraham his skills. The only prerequisite for this would be that Lincoln should use the fight against the vampires not to satisfy his desire for revenge, but for the good of mankind. The only price he would have to pay would be his self-imposed loneliness. For a vampire hunter must not surround himself with friends and family, leaving him vulnerable to his enemies. Abraham is able to keep this promise until he meets and falls in love with Mary (Mary Elizabeth Winstead). He realizes that he cannot fight the battle against evil the way Henry taught him. He must take a different path, the path of politics. But there are moments when even the strongest words cannot replace the axe...

The basic idea of the novel Abraham Lincoln Vampire Hunter by Seth Grahame-Smith, who previously added zombies to the Jane Austen classic Pride and Prejudice, is in itself very original and guarantees enormous entertainment potential. This combined with Timur Bekmambetov's very special visual aesthetic and his way of choreographing big action sequences should actually guarantee quite a big cinematic treat. That's what this somewhat different history lesson has become in its best moments. When the absurdity of it all is downright celebrated and Bekmambetov loses himself in his not always quite first-class special effects, then this vampire hunt is really a lot of fun.

In other moments, however, the film has exactly the problem that already failed Cowboys & Aliens: the mixing of the different genres, in this case horror film and historical drama, simply takes itself too seriously to offer light-hearted pleasure. Sure, actually already the title of the movie makes it impossible for the story to be taken even remotely serious. But especially in the middle part Bekmambetov relies so heavily on dramatic pathos that the entertainment value clearly suffers. The absurdity of the story and the sometimes trashy, but extremely amusing action sequences just don't quite want to fit together with the dark and dramatic moments. This results in a somewhat disharmonious overall picture that doesn't completely meet the demands of any target audience.

Nevertheless, Abraham Lincoln Vampire Hunter has enough positive aspects on its side to be able to leave quite a positive impression in the end. Sure, the whole thing isn't particularly ambitious entertainment cinema, and the possibilities that this original premise would have offered are only marginally exploited. Bekmambetov's style of depicting completely over-the-top action sequences and his visual aesthetic, however, make up for some of the film's weak points. If you like horror fare of the slightly trashier kind, while remaining well above the level of the infamous Syfy or Asylum productions, you can safely go vampire hunting with Abraham Lincoln. Worth seeing