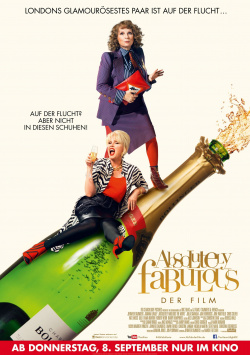 Edina (Jennifer Saunders) and Patsy (Joanna Lumley) are back! And if you think the self-proclaimed society ladies have gotten a little quieter or less ego-focused as they've gotten older, you're sorely mistaken. Because the ladies just don't know how to age gracefully. They still want to be relevant, even if it's not that easy. After all, the two have slept through all the important new trends while preferring to drink bubbly and drive those around them crazy. When Edina learns that Kate Moss is looking for a new PR consultant, she sees her chance to swim at the top of the success wave again. In fact, the two friends manage to get into a big fashion event where the supermodel is also a guest. But Edina's attempt to get close to Kate Moss ends in disaster and suddenly she and Patsy are on the run. Whether they can ever return to their old, comfortable society life seems more than questionable in this mess.

24 years after the start of the cult series now comes with Absolutely Fabulous - The film the first screen appearance of the cult duo Edina and Patsy in theaters. Unfortunately, this proves once again that what works well on television does not necessarily translate to the cinema. In half-hour doses, Absolutely Fabulous is truly cult. Here, punchline follows punchline, the pacing is absolutely perfect, and the wonderfully dysfunctional characters are able to develop very well. In the feature film version, this only succeeds to a certain extent. Sure, there are some very funny moments. The guest appearance of Mad Men star Jon Hamm, for example, is very amusing, and some of the dialogue also brings back memories of the best episodes of the series with its bite.

But in between, unfunny stretches spread out again and again, which are absolutely deadly for the comedic timing of the production. Too many gags fizzle out into nothingness and fail to elicit even a weary smile from the viewer. Anyone who has their first encounter with Patsy and Edina here will quickly wonder how these two ladies became a cult. After all, a few good laughs aren't enough to carry a rather thin story through 90 minutes. Fans, on the other hand, might be more willing to forgive the film for its all-too-obvious flaws. After all, the good moments, the countless brief appearances by celebrity guests and, of course, a fair amount of nostalgia certainly console over some of the less successful gags.

Of all the TV formats, the one that is most difficult to turn into a feature film is undoubtedly the sitcom. Timing and narrative structure alone follow completely different laws here. For this to succeed, it doesn't just require tried and tested ingredients that are simply pimped up a bit. But that's exactly what Absolutely Fabulous - The Movie does. It's entertaining and funny, but not as good as one might have expected given the quality of the series. A little more satirical bite instead of relying only on prominent faces would have done the script good. Therefore: For loyal fans of the series, the whole thing is worth watching just because there is the long-awaited reunion with the popular cult characters. And also because the humor of the series can be felt in many moments. But if you don't know and love the series, you'll have a hard time feeling entertained here for over 90 minutes. And therefore there is the Absolutely Worth Seeing also only with clear deductions!

Cinema trailer for the movie "Absolutely Fabulous - The Movie (Großbritannien 2016)"
Loading the player ...