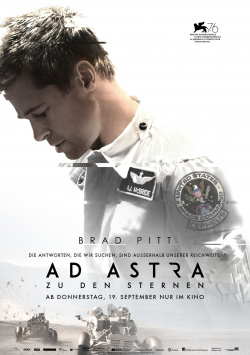 Ad Astra - To the Stars

When the earth is threatened by mysterious energy waves, astronaut Roy McBride (Brad Pitt) receives an order from NASA to search for the trigger of the threatening waves. A key to this could be Roy's father Clifford (Tommy Lee Jones), who set off on a mission to Neptune 20 years ago and has been considered lost ever since. Roy's superiors assume that Clifford is still alive and that he has something to do with the energy waves. Now it is up to Roy to travel to the outermost edge of the solar system and secure the survival of our planet. But what he experiences on this dangerous path not only makes him question his own place in the universe…

With "Ad Astra - To the Stars" director James Gray ("We Own the Night") sends his audience not only into space, but also into the abysses of the human soul. His film is only rarely a pictorial SciFi spectacle, but in most moments a very calm, almost philosophical view of life, of father and son relationships and of being human. Those who expect action and tempo will surely be disappointed and put to a hard test of patience. For when Roy looks back on his life during his journey and reflects on the meaning of the whole, then it may have a certain substance. It may also be visually and atmospherically convincing. But it's also a little tough.

It's a shame that some really good approaches are never fully exploited. For example, Roy has to make a stopover on his way on the now colonized moon. Here, Gray and his team not only implemented really great visual ideas, but also woven in socio-political reminiscences that could have been further developed. But as soon as this fascinating moon world has been able to unfold, the journey continues. That's unfortunate in that shortly thereafter there is a scene that is affectionate in the truest sense of the word and so silly that it deprives the film of quite a bit of credibility.

"Ad Astra - Zu den Sternen" is a conglomerate of very successful, but also a few unsuccessful ideas. An ambitious piece of science fiction cinema that, despite great actors, great effects and dramatic depth, is not as special as he would like it to be. At the end there is a conflicting impression, because the movie is really good at its core, but some small weaknesses make sure that there is no lasting impression, as for example in "Interstellar". So the bottom line is a satisfied, but also slightly behaved: Worth seeing!