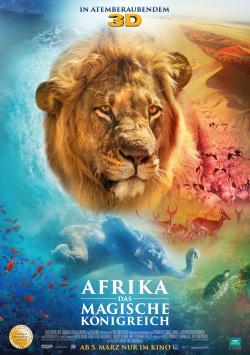 Africa - the second largest continent is characterized by a tremendously diverse flora and fauna. Gorgeous landscapes, mysterious habitats for some of the most majestic and fascinating creatures. It is the stark contrasts between the dense forests and the barren desert, between great seas and small oases, that make Africa an exciting subject for documentary filmmakers time and again. And so, especially in recent years, numerous nature and animal documentaries have been released that had Africa and its animal inhabitants as their central theme, or at least. Africa - The Magic Kingdom is now another such film, which tries to stand out from the competition with state-of-the-art shooting techniques and spectacular 3D images.

Purely visually, the team around the two directors Patrick Morris and Neil Nightingale has quite succeeded. Whether in the forests of Rwanda, where they visited the endangered mountain gorillas, in the Kalahari Desert, where they accompany a herd of elephants in search of water, or along colorful coral reefs in the depths of the ocean - what has been captured here with the latest technology is in itself truly spectacular and absolutely worth seeing. Especially on the big screen, moments like the numerous fascinating slow-motion shots or enormous enlargements (of the lively goings-on of an ant tribe, for instance) are truly breathtaking.

However, Africa - The Magic Kingdom unfortunately has to contend with two major problems. On the one hand, a very broad spectrum is worked off in quite a short time, which is why many aspects that are interesting in themselves are only treated very superficially. The information, which one hopes to hear here, is only given very rarely. And that brings us to the second problem: the voice over commentary. No question, Christian Brückner is a good speaker. But the texts he has to recite here with his distinctive voice are often extremely flat. Most of the time they only tell you what you can see anyway. The commentary doesn't offer a really informative added value. Rather, it only distracts and thus also minimizes the effect of the great pictures.

Africa - The Magic Kingdom is not a bad nature documentary, but one that, despite technical finesse, just does not manage to stand out from the crowd. And as such, it can hardly add anything new to the genre that has been somewhat overused in recent years. Nice to look at, but unfortunately very empty of content and therefore only worth watching with some reservations!

Cinema trailer for the movie "Africa - The Magic Kingdom (Großbritannien 2014)"
Loading the player ...