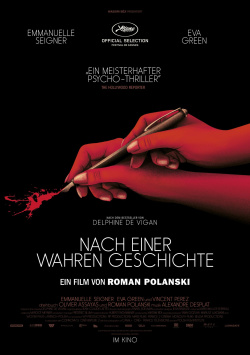 Based on a true story

Since landing a bestseller with a very personal novel about her mother, Parisian author Delphine (Emmanuelle Seigner) has suffered not only constant hostility from her family circle, but also extreme writer's block. She avoids the public eye as best she can, but book tours and book signings are increasingly taking their toll. But then Delphine meets the charismatic ghostwriter Elle (Eva Green). Against her usual instincts, she quickly comes to trust the mysterious woman, who takes on numerous tasks for Delphine as a matter of course so that she can concentrate fully on writing again. Elle even pretends to be Delphine to stand in for her at a reading. More and more Delphine gives up control of her life to Elle - although she doesn't really know anything about this woman. Who is Elle, anyway - and what does she want from Delphine?

With After a True Story Roman Polanski returns to ambiguous thrillers in the style of his early work The Tenant. While it falls short of its class, Polanski nevertheless shows that he still has it in this genre. He perfectly succeeds in building up an oppressive and threatening atmosphere, although strictly speaking not much really happens for long stretches. But little hints and especially the great ice-cold looks of Eva Green make sure that you always stay captivated even during the more lengthy moments. Admittedly, the production could have used a little more pace. Because every now and then Polanski just hits the brakes too hard, which noticeably hurts the intensity of the story.

But those who manage to get involved in the confusion play, which has been reduced almost to a two-person play, will be rewarded with a superbly acted psychological thriller. Polanski's wife Emmanuelle Seigner plays the writer on the verge of a nervous breakdown believably in every second. Given the hostility from her own family, it's completely understandable why she's so quick to let a stranger catch her before she finally falls into the abyss. Eva Green exudes an irresistible charm, which you fall for even as a viewer until her facial expression changes from one second to the next and she suddenly has something frightening, almost beautifully demonic about her. Green embodies these two sides of Elle brilliantly.

The interplay of the two actresses is then also, the After a True Story always pulls out when Polanski's direction loosens the reins and lets the action plod along too ponderously. If he would have shown a little more finesse here, the thriller could have easily measured up to his early work. As it is, it brings back memories of some of Polanski's strongest films and also features two great actresses. And for that, despite some weaknesses, there is also a deserved: Absolutely worth seeing!

Cinema trailer for the movie "Based on a true story (Frankreich 2017)"
Loading the player ...