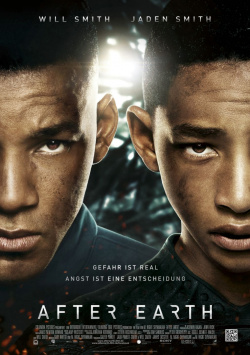 Once upon a time, M. Night Shyamalan was considered Hollywood's wunderkind, a potential successor to Steven Spielberg. He was acclaimed by critics and audiences alike for his films The sixth Sense and Unbreakable. And even with the somewhat weaker follow-ups Signs and The Village, he was still able to celebrate great success. The image only began to show clear cracks with the fairy tale The Girl from the Water. The fact that Shyamalan wrote himself a leading role in the story was seen by many as arrogant and the film flopped despite some wonderful pictures and really nice ideas. With the messed up eco-horror The Happening and the fantasy-adventure The Legend of Aang he seemed to have finally dug his own grave, at least from an artistic point of view. Salvation came in the form of Will Smith. He had the idea for a big science fiction adventure that Shyamalan was supposed to direct. A big budget and a superstar as a drawing card, nothing can really go wrong - right?

After Earth is set in a distant future. After humans made Earth uninhabitable, they were evacuated 1000 years ago and have built a new life on Nova Prime. The only major danger the humans will face here is a bloodthirsty alien race called Ursa, who track their victims by smelling their fear. A few fighters manage to outsmart the Ursa by what is known as ghosten: they hide their fear and become invisible to the enemy. The most legendary of these fighters is Cypher (Will Smith), whom his son Kitai Raige (Jaden Smith) is determined to emulate. But his hot temper keeps putting obstacles in his way. At the urging of his wife, Cypher wants to try to get closer to his son and so he takes him on a mission that is also supposed to be his last. But on the flight the spaceship gets into an asteroid shower, which damages the ship badly. The ship crash lands on Earth, of all places, and only Kitai and Cypher survive. In the process, Cypher is injured so badly that it's now up to Kitai alone to save his father, as well as his own life. And that is of course extremely difficult in this harsh and alien environment - especially since the spaceship still had a dangerous cargo on board, which was released in the crash.

In the U.S., the 130 million dollar production started rather restrained at the box office, followed by some scathing reviews, which even wanted to put the seal of Worst Film Ever on the work. But After Earth doesn't really deserve this harsh verdict. Even as the worst movie of the year, the sci-fi adventure can not be called, there are already several more qualified contenders for this title. However, that doesn't mean After Earth is a really good movie. The biggest problem is that the film is neither fish nor fowl. As a father-son drama, it's too shallow dramaturgically; as an action-adventure, it's too unspectacular. There are some good show values and a handful of decent moments. But Shyamalan leaves too much potential unused to really sweep the viewer off their feet.

Because the script focuses more on clichéd dialogue and worn-out conflicts instead of elaborating more on the dangers that might be lurking on an Earth uninhabited by humans for 1,000 years, there are some extreme lengths that are ultimately responsible for the negative overall impression. Because when the viewer is bored, he starts to question things that simply wouldn't have stood out during fast-paced action and gripping suspense. Why, for instance, is there no longer any evidence of human culture on Earth except for a few amazingly well-preserved cave paintings? Why can't a high-tech suit that warns of danger and even lets its wearer fly provide a little warmth in the cold? Why can Kitai breathe easily on an active volcano? These and many other questions are asked, while Kitai has to rebel against his father at the most inappropriate moments and he throws around pseudo-philosophical survival instructions.

The fact that the two main actors are also not very convincing is actually only marginally negative. As Will Smith is reduced to sitting still and looking around with a petrified expression, his acting limitations are revealed. Even though Smith has held his own in dramatic roles before, here he simply fails to hold his own against the flat dialogue and make his role even remotely interesting. And Jaden Smith, with only one available facial expression, simply shows too little acting talent to carry this film on his still very young shoulders. True, he does relatively well overall when it comes to the action. But as soon as he is dramatically challenged, it becomes clear that being a Hollywood star can buy your son a lead role, but not talent.

After Earth has its moments and some good ideas like the Ursa, which reveal what potential there is in the basic idea developed by Will Smith. But the weak execution and not really stronger acting performances nip any possibility of a great sci-fi adventure in the bud. So After Earth is thankfully not a second Battlefield Earth. But more than quite nice popcorn entertainment with numerous clichés that lead the viewer to roll his eyes in annoyance, the film has not become. So the opportunity to save his reputation as a filmmaker, M. Night Shyamalan has again not used here. Too bad!