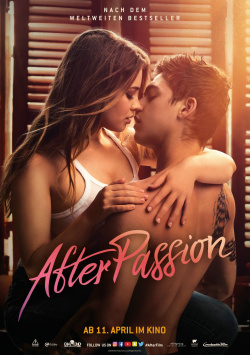 For Tessa Young (Josephine Langford), it's the start of a new life as she begins her studies. Leaving her single mother Carol (Selma Blair) and her high school sweetheart Noah (Dylan Arnold) behind in her hometown, she dedicates herself to studying full-time from now on. But her new roommate Steph (Khadijha Red Thunder) finds that extremely boring. She would rather show Tessa how much fun life can be. And so she drags the girl along to a party where Tessa meets the arrogant Hardin Scott (Hero Fiennes Tiffin). Although he doesn't treat her very nicely, this encounter triggers something in Tessa - something that will actually change her life forever.

As a film critic, I watch a lot of movies where I'm not part of the target audience (anymore). However, I often still manage to put myself in the shoes of the intended target audience and thereby discern whether a film is worth watching for the people it's made for. As I said, I often manage to do that, even when I'm not part of the target audience at all, or ever have been. But in some cases, despite tremendous effort, I don't succeed. After Passion is one such case. Just as with the Fifty Shades films, I just can't get my head around how girls and women can find such stories, some of them dripping with really nasty and stone-age clichés, so good. But unfortunately there is a market for that and you have to accept that.

So the attempt to approach a rating quite objectively. But quickly I realize that a factual evaluation makes no sense. Because if the target audience would evaluate it factually, Anna Todd's books would never have become so successful. Because hand on heart: this story, conceived as fan fiction about One Direction singer Harry Stiles, is not really well written. But that doesn't bother the mostly female fans of the books much, which is why they will hardly notice negatively that the dialogues of the movie adaptation can hardly be undercut in flatness and the actors all act extremely wooden.

What is really sad, however, is that the many clichés still work. There the good girl immediately weakens when she is treated badly by a bad boy - because he can of course quote Bront&euml; and has under his hard shell a soooo good core that only she can uncover. Because her love will save him. So then it's okay and even extremely romantic that she cheats on her boyfriend. It's not a bad thing, after all, he's absolutely understanding and nice - and nice, as we all know, is boring and thus not desirable.

Whoever doesn't immediately get the bile up at such clichés and whoever really believes that guys who treat a girl with arrogance and arrogance basically just want to be saved, can happily watch this movie and will probably be well entertained. Everyone else will suffer for 106 minutes, not the least of which is the soundtrack, where really every song sounds the same. Sorry, but for this there is really only one: Very conditionally worth seeing!

Cinema trailer for the movie "After Passion (USA 2019)"
Loading the player ...