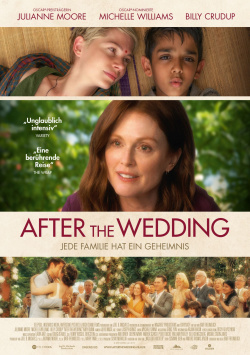 Isabel (Michelle Williams) devotes her life entirely to maintaining an orphanage in Calcutta. The heavily wealthy Theresa (Julianne Moore) wants to support her with a generous donation - but on one condition: Isabel must come to New York for a face-to-face meeting. Although she is convinced that she is more urgently needed by the children of the orphanage, Isabel travels to the USA, where she bursts into the middle of the wedding preparations of Theresa's 21-year-old daughter Grace (Abby Quinn). In this world of luxury and money, Isabel feels absolutely uncomfortable, made worse by the fact that her old love Oscar (Bill Crudup) turns out to be Theresa's husband. It quickly becomes certain to Isabel that she and her project were not chosen for the donation by chance. But to get the money, she must confront a dark secret from her past.

After the Wedding is the U.S. remake of Susanne Bier's Oscar-nominated 2006 drama After the Wedding, but director Bart Freundlich has reversed the gender roles for his adaptation. Whereas both the head of the orphanage and the billionaire who might save the orphanage were men in Beer's film, both characters here are female. Those familiar with the original will know that this change gives the story a slightly different emphasis. After all, without giving too much away, the main character's past weighs much heavier in the case of the US remake than it does in the original, adding a bit more dramaturgical weight to the proceedings.

The comparison between the two films is particularly interesting at this point, as it juxtaposes a conscious decision with complete ignorance. Although the stories are otherwise almost similar, this aspect makes them very different, which definitely justifies a remake and makes it well worth watching even for viewers who know Beer's original. However, this is also ensured by the two strong leading actresses, who carry the film even over such moments in which a little too much pathos is used.

The drama raises some interesting questions, but also seems a little contrived here and there. As a result, viewers unfamiliar with the Danish-Swedish original will quickly anticipate the story's twist. In the end, however, this does little to change the fact that the story is told in a very rousing and emotional way. The great actresses and engaging camerawork support the all-around positive overall impression of this remake, which actually manages to tell the same story again in a new, very different way. And for that, there's clearly a: worth seeing!

Cinema trailer for the movie "After the Wedding (USA 2019)"
Loading the player ...