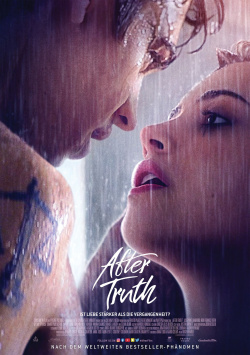 The sultry love triangle of Tessa Young (Josephine Langford) and Hardin Scott (Hero Fiennes Tiffin) enters its second round. However, their young happiness seems to have run its course. Tessa can't forgive Hardin for lying to her and so she tries to make a fresh start without him. She succeeds quite well, until she calls him one evening after a few too many drinks. Promptly Hardin is in front of her again and despite considerable misgivings the romance flares up anew. In fact, this time everything seems to be going well - until Hardin once again reveals that he just can't shake the demons of his past.

After After Passion was quite successful, especially in Germany, the film adaptation of the second volume of Anna Todd's popular Young Adult series, After Truth, is now coming to our cinemas. There was a little hope in the run-up that the movie would be better than the predecessor. After all, it's directed by Roger Kumble, a filmmaker who proved with Ice Cold Angels that stories like this can be told with bite, tongue-in-cheek humor, and interestingly drawn characters - all aspects in which After Passion is clearly lacking. In fact, Part 2 works a little better than the first. Thus, the target audience and fans are absolutely satisfied. That's all that really matters, after all. Still, it must also be said that After Truth is also far from being a good movie.

The story is made up of set pieces from similar teen romances that have been used countless times before and never rises above the level of a Bravo photo love story. This may not bother the target audience, but it ensures that the story and protagonists are absolutely interchangeable. Also, the soundtrack sounds again like all other Young Adult film adaptations of the last years. Originality? Missing! So the characters are drawn absolutely one-dimensional and are only embodied by actors with limited talent. Especially hero Fiennes Tiffin reveals in the more dramatic moments that he may break girls' hearts, but is guaranteed not to win any awards for his acting.

In principle, it's gratifying that distributors are bringing crowd-pleasers like After Truth back into cinemas, and every male and female visitor helps the hard-pressed cinema landscape. And if the target audience is happy, that's perfectly okay. Still, it can and must be criticized when a film throws around clichés like this and lacks any form of original ideas or interesting characters. Therefore: As a movie After Truth is really not good - but for fans of the first part this sequel is still absolutely worth seeing!