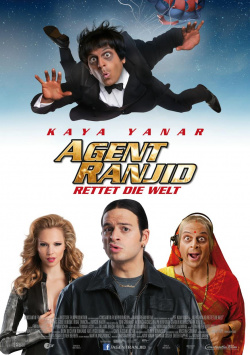 Dutch villain Freek van Dyk (Rutger Hauer) has a diabolical plan: using a cell phone developed by an ingenious scientist, he can hack into any cell phone and turn its owner into his will-less puppet. Using a satellite, which the nasty clog-wearer plans to steal, his cell phone's range is to be extended around the globe, which would allow him world domination. Intelligence agencies around the world are hunting van Dyk, but his accomplice Viagra van de Hupen has yet to take down any secret agent with her magical cleavage. So now the German-based Turkish secret service Ayran Secret Service (ASS) is to put a stop to the Dutchman. Süperagent Hakan (Kaya Yanar), who has a shared past with Viagra, is able to resist her cleavage, but is nevertheless incapacitated. And now a new top agent has to be found. Too bad that only the Indian cleaner Ranjid (Kaya Yanar) is available. But he's only too happy to jump into the adventure, as he desperately needs the money to pay for a much-needed stomach surgery for his beloved cow Benytha before she farts herself to death. And the time for Benytha and the rest of the world is getting shorter and shorter...

One thing right away: I have nothing against Kaya Yanar. Especially his stand-up comedy is full of funny moments and also his TV shows have their qualities especially for friends of German comedy. It's not for nothing that Kaya Yanar has already won several awards. A feature film had been planned ever since the great success of Was guckst Du?! but it has only just become reality. In Agent Ranjid rettet die Welt (Agent Ranjid saves the world), the Frankfurt-born Kaya Yanar has to fight his way through a mixture of clumsy clamour and crude slapstick in his parade roles as the Indian Ranjid and the bouncer Hakan, which unfortunately has very little in common with the quality of his stage programmes.

It's not that Michael Karen's (Erkan & Stefan - Death Comes Crass) film isn't funny here and there and can satisfy fans of the comedian in particular. But unfortunately, many gags are either completely overused and ridden to death, or they are so flat implemented that even the most strained grimaces of the actors can not save much there. Why Yanar, who is capable of clever gags, allows himself to be fobbed off with unfunny fecal humor and stale corny jokes remains a mystery. The best gag, which unfortunately can only be seen in the end credits, proves once again what Yanar and his co-writers would have been capable of.

Instead, an agent comedy is presented, which is more likely to please fans of old Tom Gerhard films than those of Yanar's stand-up comedy. Neither the charm of the comedian, with which he can save himself from some not quite successful gags, nor the talent of his co-stars like the Hollywood-experienced Rutger Hauer or the German Film Award nominated Vedat Erincin (Shagada, Almanya - Willkommen in Deutschland) helps. If you like works like Mario Barth's Männersache, Voll Normaaal or the Erkan & Stefan films and can laugh at that lowered humor, you'll probably find Agent Ranjid saves the world deliciously amusing as well. But if you're hoping for the humor you're used to seeing from Kaya Yanar on stage, you're guaranteed to be bitterly disappointed. Too bad!