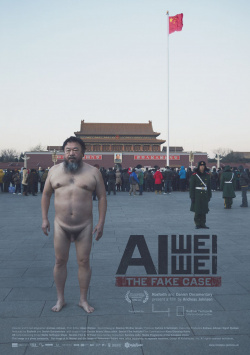 He is arguably the most famous Chinese artist of the moment. But for the regime of his homeland, he is also one of the most unpleasant personalities. For the conceptual artist, publisher, architect and successful blogger Ai Weiwei is a merciless critic of the regime, who openly voices his displeasure against the government and against the conditions in his country time and again. And this, of course, is not without consequences. In 2011, the artist was sent to prison for alleged tax evasion. After three months of imprisonment and worldwide protest, Ai Weiwei was placed under political house arrest for a year starting in June 2011. But even in this situation, Ai Weiwei does not even think of giving up his fight. He continues to provoke wherever and whenever he can.

Ai Weiwei The Fake Case follows the artist through the months of house arrest. Filmmaker Andreas Johnson gets up close and personal with the artist with his camera from the moment Ai Weiwei is released from prison. The film shows how Ai Weiwei's life has changed as a result of his time in prison and how he tries to process these experiences artistically. The viewer can observe him as he resumes his struggle and what new obstacles are put in his way again and again. And at the moment when Ai Weiwei, who always seems very calm and level-headed, suddenly turns into a wild fury and lashes out at a policeman, the Danish filmmaker is right there.

Whoever has seen the artist in an interview before his imprisonment or has seen the documentary Never sorry from 2012 will recognize how much Ai Weiwei has suffered under his imprisonment. But restrictions such as the fact that he can't go for a walk in the park like he used to, but now has to confine himself to the desolate parking lot to see if anyone is following him, are clearly gnawing away at his psyche. The fact that he still doesn't let it get him down shows his very special greatness. Johnson's film also proves once again what an engaging personality Ai Weiwei is. He is an extremely brave man and a very clever mind, but he conducts his fight against the regime with tremendous willpower and intensity. And people admire this so much that they send him unsolicited money so that Ai Weiwei can afford the court-ordered repayment. From the very moving messages his supporters have sent him along with the money, he also draws new strength and the awareness that his struggle, however futile, is definitely worthwhile.

Ai Weiwei The Fake Case, despite its very quiet pace, is a very exciting documentary that is very much, in the end, much more than the stirring testimony of a resistance struggle or an intense portrait of an artist. It is a film that makes you think, that is also a little scary, especially with regard to the very current topic of digital surveillance, but in the end also gives you a little hope. If you appreciate sophisticated documentaries or want to see a continuation of Never sorry, you should definitely not miss this film. Worth seeing