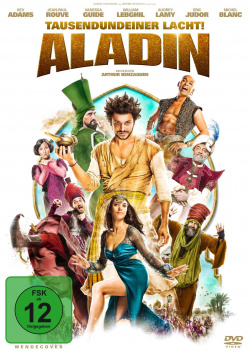 Aladdin - One Thousand and One Laughs - DVD

Film: You think you know the story of Aladdin and the genie from the magic lamp? Then you'll be proven wrong in the hit French comedy "Aladin - Thousand and One Laughs".When two small-time crooks try to rob a department store at Christmas, Sam (Kev Adams), one of the two crooks, finds himself in the awkward position of having to tell a fairy tale to a group of nagging children. In order not to blow his cover as a department store Santa Claus, he tells the kids his version of the fairy tale of Aladdin: In it, he himself is the fearless Aladdin, who frees the Djinn (Eric Judor) from the bottle and with its help wants to conquer the heart of the beautiful princess Shallia Sofia (Vanessa Guide). However, she is to marry the nasty Grand Vizier (Jean-Paul Rouve), who has a very sinister plan. This must now be thwarted, if Aladdin wants to stand at the end as a hero...

"Aladin - One Thousand and One Laughs" was a huge box office success in France back in 2015. Over 4 million viewers saw the film in cinemas, which is why a sequel was also released in 2018. While lead actor Kev Adams is rather unknown in this country, he is very popular and enormously successful in France both as an actor and as a comedian. But the popularity of the main actor is not the only reason for the success of the comedy. The film looks pretty darn good, which is as much due to the colorful set as it is to the backdrops and locations, some of which are familiar from "Gladiator" or "Game of Thrones".

In addition, the film scores with numerous allusions to other cult classics from cinema and comics. Admittedly, not every gag fits and especially when the humor seems to have been inspired by greats like Monty Python, you clearly notice that the immortal British troupe plays in a completely different league than director Arthur Benzaquen and his good-humored ensemble. But the whole thing is still fun, at least if you like a bit of silly claptrap. Because then you not only get some good laughs, but also a great dance sequence reminiscent of Bollywood and other showpieces.

Sure: if you expect really great cinema with cult character, you will probably be disappointed. Because the level of persiflage like "Die nackte Kanone" or also "Der Schuh des Manitu" is unfortunately not reached here. But it can be said that fans of such comedies are also in good hands with "Aladin - Tausendundeiner lacht". Even those who liked the humour of the real-life adaptations of "Asterix" will be able to laugh at this very own Aladdin variant. And that is clearly enough to give this French comedy a clear "Recommendable".

Picture + Sound: The picture of the DVD pleases with very strong colors, a decent overall sharpness and coherent contrasts. Especially in the bright outdoor scenes, even smaller details come out well, even if there is still a little room for improvement overall. The Dolby Digital 5.1 mix powerfully transports dialogue and music from the home theater speakers, whose surround channels are also stressed by a few well-executed sound effects. Good!

Extras: As an extra, in addition to the trailer, there is a making of, but after barely 2 minutes it is already over.

Conclusion: "Aladin - Thousand and One Laughs" is a colorful satire on the well-known fairy tale from 1001 nights. With many allusions to other classic films, a great set and some nice gags, the comedy offers 100 minutes of good humor, even if not every gag hits the mark and a little more subversive humor would have been desirable. All in all, it's entertaining fun, which is presented on the DVD in good picture and sound quality. It's just a pity that the making of is far too short with just 2 minutes. Nevertheless, there is for the disc a satisfied: Recommendable!