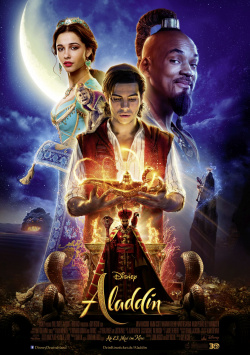 The young street thief Aladdin (Mena Massoud) leads a simple but content life on the streets of Agrabah. When he meets the beautiful princess Jasmine (Naomi Scott) one day, he is immediately smitten. The simple thief has fallen in love with the princess. Actually, he should stay away from her, but in order to give her back a bracelet that his monkey stole from her, he sneaks to his beloved in the palace. Too bad, he gets caught by the evil sorcerer Jafar (Marwan Kenzari). To escape certain death, Aladdin must take on a dangerous task: He is to recover from his mysterious cave a fabled treasure: a magic lamp! Unaware of its power, he unintentionally frees the genie Genie (Will Smith), who will grant him three wishes. Everything now seems to change for the better - until Jafar comes on to him.

Disney's animated film Aladdin was a huge box office success in 1992. This was also due to the great dubbing of Genie, for which Robin Williams was responsible in the original and his great regular voice actor Peer Augustinski in Germany. The catchy songs, the timeless story and the beautiful animations also contributed to the success of the animated film. Since Disney is giving every title in the Mice catalogue a makeover as a live-action film, it was Aladdin's turn. Guy Ritchie, who had already successfully dusted off Sherlock Holmes (at least financially), was put in the director's chair, probably in the hope of giving the whole thing a bit more pace.

However, the film was not initially under a good star. When the first trailer was released, and with it the first look at Will Smith as Genie, the reactions to it were almost universally negative. And so, after the disappointing performance of the live-action adaptation of Dumbo, another financial as well as artistic failure seemed to be on the horizon. But now that the finished film has been released, it can be said: Disney may have gotten its wish for another successful live-action adaptation. Word has quickly spread that Aladdin is nowhere near as bad as the trailer made it seem.

So, really, the remake is still not necessary with this. There are some things that can be legitimately criticized. The casting of Marwan Kenzari as Jafar, for instance, is utterly unconvincing. He seems way too young and struggles through the film with only a facial expression that is anything but terrifying. One would have expected a stronger presence from a powerful wizard. Then there's the completely unnecessary and far too silly character of Prince Anders, who could be cut out of the film entirely without it harming the story in the least - quite the opposite! Yes, and then there's Will Smith. He does manage very well to make the popular character his own, stepping out of the oversized shadow of Robin Williams. But the scenes where he's all too obviously completely animated seem a little disconcerting, as they did in the trailer.

The familiar songs have been neatly modernised - apart, perhaps, from an unimaginative version of A Friend Like Me, which Will Smith recorded for the end credits with DJ Khaled. Why does he have to shout his name so obtrusively before every song? Well, be that as it may, otherwise the musical makeover didn't hurt the film. The set and the effects mainly rely on bright colors and other wow effects. This all seems a bit overdrawn and thus also very artificial, which, however, also fits the story in many places.

All in all, Aladdin has become an entertaining family film. There are aspects that - at least for fans of the animated film or viewers older than 10 - aren't quite as successful. But a decent pace, a convincing Will Smith and the catchy songs have prevented the disappointment suggested by the trailer from largely materialising. And for that, then, there's a: worth seeing!