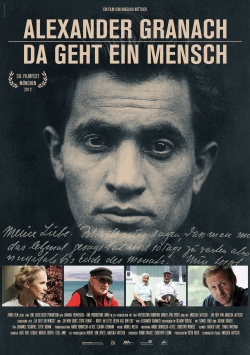 Alexander Granach - There Goes a Man

Alexander Granach's life was absolutely cinematic in the truest sense of the word: born in 1890, the ninth of thirteen children in a poor Jewish family in Galicia, now Ukraine, the bow-legged Jessaja Szajko Gronach learned the baker's trade in his father's bakery at the age of six. At just twelve, he ran away from home and kept his head above water by working as a baker's assistant until he discovered his passion for acting at 14. His way led him to Berlin where he finally made it to the Max Reinhardt acting school at the age of 22 after some hard years. When the first role offers came he changed his name into Alexander Granach and had his legs broken in a risky operation. After a four-year interruption because of his service in the Austrian army Granach became a star of the German theater, then also in the silent and talkies. He probably reached his first peak with his role in Murnau's NOSFERATU. After Hitler came to power, however, the actor had to flee Germany in 1933, eventually making his way to America via tough detours, where he enjoyed great success in Hollywood and later on Broadway.

Although he worked with great directors such as Ernst Lubitsch and Fritz Lang and his autobiography Da geht ein Mensch (There goes a man), which Granach, who died in 1945, did not live to see published, was a great success, the actor is in danger of being forgotten more and more, even by sworn cineastes. Filmmaker Angelika Wittich now wants to counteract this with her documentary Alexander Granach - Da geht ein Mensch. In doing so, however, she follows the usual path of biographical documentaries only to a limited extent, tracing various stages of his life on location in Ukraine, Germany or America, and allowing his son Gad Granach, contemporary witnesses and historians, writers or journalists to have their say. She contrasts this rather factual and informative part of the film with scenes in which she has the actors Juliane Köhler and Samuel Finzi read from Granach's letters to his great love, the Swiss actress Lotte Lieven, and from his autobiography.

These scenes, in which the voices of the two readers sometimes overlap, are also what make this film take a little getting used to. It's true that the read passages help to build up a deeper understanding of Alexander Granach as a person. On the other hand, this aspect seems to be a bit exhausting, tears out of the otherwise good flow of information with its carried manner of speaking. As a result, viewers who favor more traditional documentaries may find themselves quickly bored by these very artificial-looking scenes, which admittedly then has a negative effect on the rest of the film.

It is quite clear that Wittich has researched very intensively and approached this project with a great deal of passion. This is commendable in that the story of Alexander Granach is not only highly interesting to film and theatre enthusiasts, but also has many exciting moments to offer from a historical perspective. Unfortunately, many of these exciting aspects are only touched upon, since the film spends much more time on other moments and then is also repeatedly slowed down by the excerpts from the letters and the autobiography. In order to enjoy Alexander Granach - Da geht ein Mensch, one has to fully accept the somewhat slow pace of the production and the sometimes unfamiliar style, and at the same time one should refrain from expecting to gain a balanced and comprehensive insight into the actor's exciting life, despite the obviously intensive research. Whoever succeeds in doing so, however, will be offered a very interesting documentary that definitely accomplishes one thing: it makes you want to learn more about Alexander Granach. And that makes the film, despite its weaknesses, still: worth seeing!