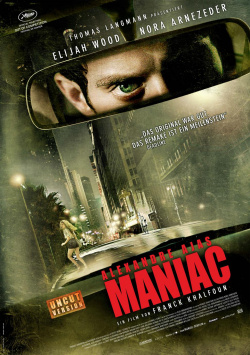 Frank (Elijah Wood) is a loner who lives in complete seclusion in downtown Los Angeles. There, he runs a mannequin shop that he took over from his mother. Frank has a very special relationship with his dolls. He decorates them with trophies from his nightly forays, where he hunts down women and brutally kills and scalps them. In doing so, Frank hopes to humanize his dolls to the point where they can fill his deep emotional void. But since this hardly succeeds, he must repeatedly pursue his bloody urges. When the young artist Anna (Nora Arnezeder) comes across Frank's shop while searching for motives, she is immediately fascinated by the elaborately reconstructed dolls. And the shy Frank also exerts a certain fascination on the young woman. But with the beginning of their friendship, Anna also seems to have sealed the end of her life.

William Lustig's 1980 slasher classic Maniac is undoubtedly one of the most controversial exponents of its subject. Hailed by some as a misunderstood masterpiece, by others it was simply dismissed as sick, extremely misogynistic trash, which may well have led to the film being confiscated in Germany shortly after its release. Now, French director Franck Khalfoun (P2 - Parking Garage of Horrors), with the help of Alexandre Aja (High Tension, The Hills Have Eyes), has ventured to remake the shocker. In order to be as distinct as possible from the original, Khalfoun has resorted to two rather unusual devices.

The first is lead actor Elijah Wood, who is already physically distinct from original Frank Joe Spinell. The second aid is the subjective camera, which shows the action almost entirely from Frank's point of view. Except for brief moments where the killer looks in the mirror and in one scene where he has an out-of-body experience during a murder and watches himself commit a blood crime, Wood is not seen as a person. The viewer sees through his eyes and hears his jumbled thoughts, allowing a deeper insight into the man's troubled psyche.

Using this stylistic device was a very bold decision, the killer's point of view does take away some of the tension and overall takes some getting used to. But what Kahlfoun achieves through this is much more effective on another level than conventional slasher films. Frank is not only portrayed as a completely deranged maniac, but also as a kind of tragic figure. It is through his encounter with Anna that it becomes clear how much he longs to be able to love normally and how much he despairs at the impossibility of that desire. This bleakness is reinforced by the supercool visuals and the atmospherically dreary synthesizer soundtrack.

However, Frank's deep dive into his psyche doesn't make him a sympathetic figure, nor does it rob his brutal murders of their effectiveness. Quite the opposite, in fact. As it becomes clear that he has surrendered to his inner demons awakened by a traumatic childhood and can only quiet them for a short time by killing and scalping women, makes the so unassuming Frank a truly terrifying killer who drags not only his victims but also himself deep into the abyss.

Maniac is purely stylistically a rather unusual slasher and one that takes a lot of getting used to. The subjective camera, the psychological depth, the bleak atmosphere and the sometimes very brutal murders are quite a challenge to face, even if you are a hardcore genre fan. If you're up for it and see the film primarily as a psychological thriller and only secondarily as a bloody horror slasher, this remake could offer very exciting and intense entertainment. For genre fans definitely worth seeing!