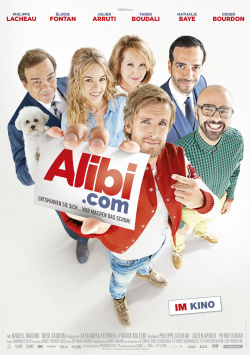 It's actually the perfect business idea that young entrepreneur Greg (Philippe Lacheau) has implemented together with his partner Augustin (Julien Arruti): Their company ALIBI.COM provides their customers with the perfect alibi - no matter if it's for a fling, for skipping school or for hiding a lottery win from the wife before the divorce. Everything is going just fine until Greg falls in love with the beautiful and quick-witted Flo (&Egrave;lodie Fontan). Because if there's one thing Flo can't stand, it's liars. And since Greg makes a living doing just that, he has to hide his true profession from the love of his life. But this threatens to blow his cover when Greg meets Flo's parents and their father (Didier Bourdon) turns out to be a client of ALIBI.COM. The two men now do everything they can to keep their secrets from being exposed - chaos is bound to ensue.

After the two very successful Babysitting films, the second part of which was also released in our cinema as Ab in den Dschungel, director and leading actor Philippe Lacheau has now stormed the cinema charts in France with Alibi.com. Over 3.6 million visitors have already laughed at the turbulent comedy. And in Germany, there could be a few more to come. The film certainly deserves it. Because even if it is not particularly profound and some gags are already very crude, so the turbulent goings-on really has a lot of really good laughs to offer.

This is especially due to the fact that Lacheau is not always politically correct. Thus he can subvert in some scenes the expectation of the spectators skillfully. The sometimes very black humor, which is then used in a pleasantly surprising way, consoles over some flat Kalauer over. Why especially the bad gags work so well is the fact that they are nevertheless served in a somehow charming way. Lacheau manages to be nasty without actually seeming nasty. The fact that this is expressed very vaguely here is simply because I don't want to give away any of those really funny surprise moments. Just this much, perhaps: whenever you think you're not allowed to laugh at what you've just seen, Lacheau kicks it up a notch, so that you can't help but be deliciously amused.

Sure, some scenes do overshoot the mark, are too over-the-top, or just come off too flat. Alibi.com is truly not a film for fine minds, but rather something for fans of brute comedy fare in the style of Hangover. But what the film manages to do really well is that it (almost) never sets the level too low below the belt and instead uses elements of classic mistaken identity comedies alongside plenty of slapstick, which are simply timelessly good. So if you just want to have a hearty laugh at a delightfully silly comedy again, this film is the best alibi for a visit to the cinema. Absolutely worth seeing!

Cinema trailer for the movie "Alibi.com (Frankreich 2017)"
Loading the player ...