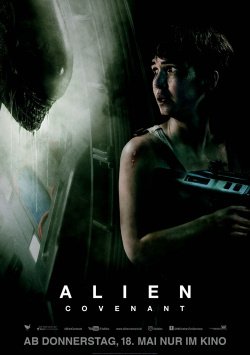 Ten years have passed since the crew of the Prometheus disappeared on their mission to the moon LV-223. Now, another starship is off in the depths of space. This time, the Covenant was on its way to an Earth-like planet in preparation for colonization by humans. When the crew members are awakened early from their artificial deep sleep by damage to the solar sails, they notice a nearby planet that could also be suitable for a new habitat for humanity and is much closer than the actual intended destination, the team decides to take a little side trip to this world. Everything seems to be perfect - until one of the crew suddenly shows symptoms of a mysterious disease. And suddenly, a nightmare of unimagined proportions befalls the settlers.

With Alien: Covenant, Ridley Scott continues down the Alien prequel path he blazed in 2012 with Prometheus. For anyone who was dissatisfied by the first installment of the prequel to what is undeniably one of the best science fiction films of all time, there's good news, but also bad news. The good is that the new film is the best in the franchise since James Cameron's Aliens. The film looks fantastic and has some bloody appearances by the Xenomorph, the mother of all aliens. The bad news, however, is that the film also expands on equal parts of the philosophical aspects already touched upon in Prometheus. As a result, the action and tension that Scott builds very effectively here time and time again are regularly thwarted. This prevents the overall picture from being coherent, which unfortunately detracts from the impact of the whole thing in the end.

Adding to that, the story doesn't really add any convincing new facets to the Alien universe. Rather, an explanation for the creation of the Xenomorph is provided here, which may sound quite interesting, but on reflection is really completely moronic and unfortunately also have a negative effect on the great first two parts of the series. It brings back painful memories of George Lucas' attempt to explain the Force through the so-called midi-chlorians in the Star Wars prequels. Some things might be better left unexplained.

Adding to this is the utterly nonsensical and reckless behavior of some crew members, which begs the question of whether there was even any training in how to behave on an alien planet before the mission was launched. This glaring script weakness is all the more annoying because the crew of the Covenant is far more interesting than the crew of the Prometheus - even if that one had the great Idris Elba with it.

Alien: Covenant works whenever the film mutates into outright horror. And the scenes where Michael Fassbender gets to play with or against himself are also quite great cinema. Visually, the film is absolutely gorgeous and also the atmosphere Scott builds up here from the very beginning makes it clear that the filmmaker still has it in him what made his 1979 sci-fi classic so special. But unfortunately, the mix of alien horror and deep psychological treatise on the origins of life only wants to work to a limited extent. No question, despite all its weaknesses Alien: Covenant is a good, in places even very good film. However, within it lurks a masterpiece that Scott destroyed through poor screenwriting decisions. Whether that can be rectified with the next prequel, which has already been announced, remains to be seen. The fact is that the quality curve is pointing upwards after the decent, yet somehow disappointing Prometheus. And if that trend continues, the third prequel could finally become the Alien movie fans have been waiting for since Cameron's 1986 sequel. Overall, however, there is already a clear: Worth seeing!