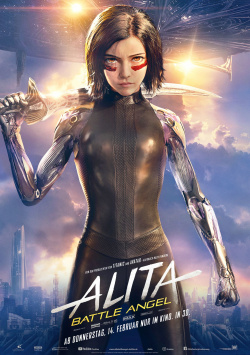 In the far future, the world has been rendered nearly uninhabitable after a devastating war. 300 years after that war, the survivors, ordinary people and cybernetically enhanced humans, have banded together in Iron City. They dwell in the shadow of Zalem, one of the last great cities in the sky, where only the rich and privileged are allowed to live. When cyber-medic Ido (Christoph Waltz) finds the remains of cyborg teenager Alita (Rosa Salazar) in an Iron City junkyard, he repairs the girl and takes her under his wing. It soon becomes clear that Alita is carrying a mysterious secret from her past that she can't remember. While Ido tries to protect her from finding out too much about her old life, the cyborg girl leaves no stone unturned to get her memories back. She may be helped by young Hugo (Keean Johnson), who is doggedly working to eventually get to Zalem. But as a very special bond develops between Hugo and Alita, dark forces discover the girl's secret powers and seek to recruit her for their own purposes.

Alita: Battle Angel was a passion project of director James Cameron for many years. First published in 1991, the manga series by Japanese comic book artist Yukito Kishiro was something Cameron wanted to bring to the big screen as lavishly and faithfully as possible. But work on Avatar delayed the project, which Cameron nevertheless refused to let go. It wasn't until he realized he would be busy with the sequels to his SiFi epic for years to come that he handed over the directing reins to Robert Rodriguez, who now got to blow a mega-budget of $170 million on bringing Cameron's vision to life.

There's no question about it: the movie looks great. Alita's big manga eyes take some getting used to, to be sure, as does the appearance of some of the cyber-humans who prey on Alita as so-called Hunter-Killers. But apart from that, the effects are the film's biggest strength. But technical perfection does little good if the rest has no soul. The story, which combines elements from different volumes of the manga series and also makes use of other genre classics like Rollerball or Blade Runner, never really manages to pull the viewer in. There are a lot of interesting aspects touched upon, however, they are never really fleshed out.

As superficial as the story itself remain the characters. Ido, charmingly played by Christoph Waltz, is an interesting character, but he is denied any opportunity to reveal more about himself to the audience. Similar is the case with his ex-wife, played by Jennifer Connelly, who would literally walk over dead bodies to get back to Zalem. It would have been interesting to get glimpses of her old life to better understand her motivations.

Alita: Battle Angel is a collection of good possibilities, but only averagely executed. It's an epic that excites visually but leaves you emotionally cold. And by the time things get really interesting, the haunting is over. The probability that the quasi-cliffhanger will be resolved tends to zero, according to initial predictions. Nevertheless: If you prefer show values to a mature story, you'll get your money's worth here. Therefore, there is, with deductions, also a decent: Worth seeing!