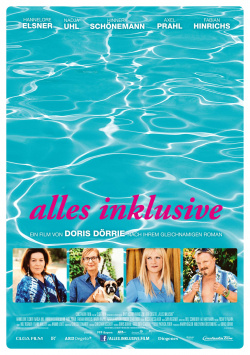 Actually, Apple (Nadja Uhl) had hoped to finally break away from her hippie mother Ingrid (Hannelore Elsner) when she travels to Torremolinos, Spain, for rehab - the place Apple has less than pleasant childhood memories with. But while Ingrid, as an aging all-inclusive tourist, no longer recognizes the place where she experienced a life full of freedom, dreams and passion over thirty years ago, and is nevertheless confronted with the past in an extremely intense way, her daughter in Germany slides from one catastrophe into the next. But just when things look like they can't get any worse for either of them, life has a few more surprises in store for them - one of them in the form of transvestite Tim/Tina (Hinnerk Schönemann), whose past is closely linked to Ingrid and Apple's.

With All Inclusive, Doris Dörrie has adapted her successful 2011 novel of the same name into a film. Somewhere between comedy and melancholy-infused drama, she tells an episodic story of mother-daughter conflicts, of people searching for their own personal happiness, of letting go of the past and of the horror of package tourism. Doris Dörrie shot her film under almost documentary conditions in Torremolinos, where her actors were allowed to act among real hotel guests. This gives the film a certain authentic flair, although this is countered by some very clichéd situations.

No question, Everything Included has some quite wonderful moments. Axel Prahl is just great and Nadja Uhl, at least at the beginning, is also very endearing in her chaotic way. The therapeutic dialogues Apple has with her dog give hope for a great comedy. But not only the episodic structure, but also some resulting lengths, as well as not quite fully developed plot elements drag down the entertainment value of the film noticeably. At some point, the action is no longer charming or amusing, but simply tough and exhausting. However, credit must be given to the renowned filmmaker for not compromising to make the work more suitable for the masses. As with Die Friseuse or Glück, Dörrie remains true to her visual as well as dramaturgical style. Those who liked her last films may find qualities here that simply remain hidden to other viewers.

Even great admirers of Doris Dörrie will not be able to deny that Everything Included struggles with some problems. But while these may weigh too heavily for some viewers to sit through the entire two-hour running time, for others, they hardly matter in a negative way. The depth that the film pretends to have here and there may actually not be there. Nevertheless, friends of German cinema comedies of the more sophisticated kind will certainly not regret buying a movie ticket. Therefore applies: with deductions for Dörrie fans well worth seeing!

Cinema trailer for the movie "All Inculsive (Deutschland 2013)"
Loading the player ...