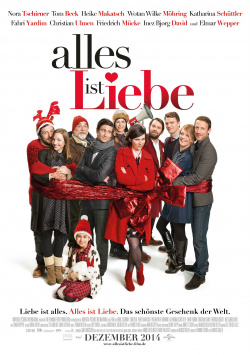 Christmas is coming and everywhere is love. Everywhere? I wish. Kiki (Nora Tschirner), for instance, has been looking for Mr. Right for a long time, after being jilted by the love of her life, Jan (Tom Beck), ten years ago. And of all things, Jan, now a big Hollywood star, is standing in front of her again. Clara (Heike Makatsch) also has problems with love after her husband Hannes (Wotan Wilke Möhring) cheats on her with their son Boris' teacher. But Christmas is actually the time of forgiveness and second chances. But can Clara really ever forgive such a fling? For Klaus (Friedrich Mücke) and Viktor (Christian Ulmen), on the other hand, the future actually looks bright, with their wedding coming up in time for Christmas. Viktor is so busy with the preparations that he doesn't notice that his Klaus is plagued by major doubts and is threatening to fall into a deep emotional hole. Kerem (Fahri Yardim) is determined to protect his heavily pregnant wife Simone (Katharina Schüttler) from such a hole. Therefore, she must not find out under any circumstances that he lost his job months ago and that he has invested her last savings in all kinds of plastic toys that he wants to sell at the Frankfurt Christmas market. The plan seems to work, until his daughter falls into the Main River during a Christmas show at the Museumsufer and Kerem has to leave his stand head over heels. Fortunately, the little girl is saved from drowning by Santa Claus. The fact that he is now celebrated as a hero does not please Martin (Elmar Wepper) at all, after all he has come to Frankfurt to face a rather unpleasant chapter of his past. But TV recording executive Alice (Inez Bj&oslash;rg David) realizes how important Martin as Santa Claus could be for more than just her career. And so she pins herself to his heels, no matter how much he wants to shake her off. Emotional chaos everywhere you look - and Christmas Day is fast approaching.

When you think of a Christmas-themed ensemble romantic comedy, associations with Actually.Love, the ultimate Christmas romance, naturally come up immediately. This connection is not far-fetched, as the film by Markus Goller (Friendship!, Eine ganz heiße Nummer) is based on the Dutch comedy Alles is liefde, which was clearly made in the wake of Liebe. But even if nothing really new is offered to the audience, Alles ist Liebe works really well with its mixture of humor, cheesy Christmas romance and great feelings - true to the motto: Better well copied, than weakly self-invented.

Who expects subtlety or dramaturgical depth, which is wrong here. Everything here is very direct and obvious. There is almost manipulative playing of the emotional keyboard, be it with the music, the beautiful images of Christmasy Frankfurt or the wide eyes of the child actors. And the course of the individual plot lines should be clear to anyone who has ever seen a romantic comedy after a few minutes. Surprises of any kind are completely missing here. That may not sound very exciting. But in its very direct, simply constructed way, the film achieves exactly what it wants: it makes its audience happy and gives them two hours of charming escape from reality.

Everything is Love just doesn't aspire to be a deep social study or intellectual head-scratcher. The film is an enchanting winter fairy tale with clearly defined characters and a dramaturgy that is limited to the essentials, allowing the audience to simply be lulled by the warmth of the story. The good ensemble of actors also contributes to the high entertainment value. True, great acting is rarely in evidence. But they all make sure that the characters they portray are brought to life in a very likeable way. While Elmar Wepper, Heike Makatsch or Wotan Wilke Möhring are more responsible for the quiet tones, unlucky Fahri Yardim or the wonderful interplay of Nora Tschirner and Tom Beck provide hearty laughs again and again.

Surely, Alles ist Liebe is cheesy and clichéd, often overdone and also a little silly. But the production has a lot of heart and especially at Christmas that is just beautiful. So if you don't expect a lot of pretension and just want to pine heartily, this German ensemble comedy can be warmly recommended. Absolutely worth seeing

Cinema trailer for the movie "Everything is love (Deutschland 2014)"
Loading the player ...