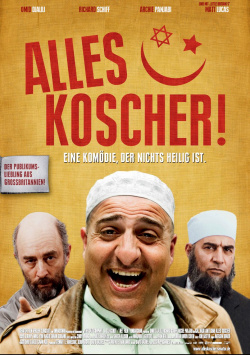 The biting satire Four Lions impressively proved that it is entirely possible to laugh at extremism and religious fanaticism without making fun of religion itself and thus making fun of the majority of moderate believers. The comedy Everything Kosher! also follows the pattern of Four Lions, but approaches the matter in a much more well-behaved but no less funny way.

Mahmud Nasir (Omid Djalili) is a good Muslim. He may not actually be a strict believer, but the loving family man stands behind his religion with full conviction. The fact that his son Rashid (Amit Shah) wants to marry the stiff daughter of the controversial preacher Arshad Al-Masri (Igal Naor), of all people, is not something Mahmud takes kindly to, but he promises his filius that he will be a model Muslim until Al-Masri gives his consent to the wedding. But now, of all times, Mahmud finds out that he was adopted as a child and - much worse - is not a Muslim by birth at all, but a Jew. He was born Solly Shimshillewitz, which shakes his entire worldview. In order to find out the whole truth about his origins, Mahmud tracks down his supposed biological father Izzy. But he is dying and may only be visited by a Jew. And so Mahmud has little time, so he asks Jewish taxi driver Lenny (Richard Schiff) to introduce him to the Jewish faith. But the more he learns, the greater his identity crisis becomes. And Al-Masri's visit is imminent.

Everything Kosher! is fully tailored for lead actor Omid Djalili. The British-Iranian actor and stand-up comedian, whose delicious comedy show could also be seen in the German night program, is fully absorbed in the role as a family man in the crisis of faith and life. With a lot of wit and charm, Djalili makes even the somewhat sillier moments of the film worth watching. The absolute highlight, however, are the scenes in which Djalili is allowed to act alongside the American Richard Schiff (Ray, West Wing). Not only do different cultures and religions clash here, but also two completely different types of comedy - which is a real treat for the viewer.

The other actors, such as Amit Shah, who was last seen in the German comedy 13 Semesters, and Archie Panjabi (The Eternal Gardener), also ensure that comedian and writer David Baddiel's script has been adequately transported to the screen. In its best moments, Everything Kosher! is an amusing and intelligent plea for tolerance. But what has a lot of bite in the first half and shows some courage here and there, flattens out a bit towards the end. Although the rather well-behaved finale is still worth seeing, but after the strong beginning with gags every minute, the last minutes are a little disappointing.

However, this hardly changes the fact that director Josh Appignanesi has succeeded in creating a charming and very funny multi-cultural crash comedy, which can entertain even in its weaker moments thanks to some very original gags and the good actors. And that's exactly why: absolutely worth seeing!

Cinema trailer for the movie "Everything Kosher! (Großbritannien 2010)"
Loading the player ...