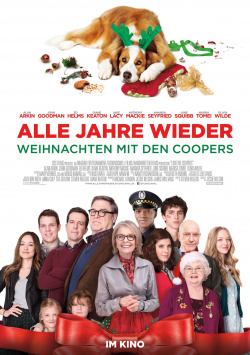 Every Year Again - Christmas with the Coopers

Christmas is not the time to expose family problems and work out conflicts. Instead, a happy face is put on and an ideal world is played out. Such is the case with the Coopers, who actually have few reasons to look forward to a harmonious family dinner. Charlotte (Diane Keaton) and Sam (John Goodman) have grown apart after forty years of marriage and are seriously considering going their separate ways. Their son Hank (Ed Helms) is a step ahead: his marriage has already been divorced and, for the sake of the kids, he has to come to the family gathering with his ex-wife. The fact that he's just been laid off doesn't exactly lift his spirits to festive heights. His sister Eleanor (Olivia Wilde), who is permanently single, is also not in the mood for the annual tradition of reproachful looks from her mother. So she unceremoniously invites a charming soldier to play her boyfriend for this one night. Charlotte's sister Emma (Marisa Tomei) has a different set of problems when she gets arrested for shoplifting on her way to the party. And head of the family Bucky (Alan Arkin) isn't quite in the Christmas spirit either when he learns that his favorite waitress Ruby (Amanda Seyfried) is moving away. All of this doesn't exactly set the perfect stage for a joyous family holiday. Well then, have a Merry Christmas with the Coopers!

Every Year Again - Christmas with the Coopers episodically tells the stories of each family member before the big gathering at their parents' house. And as is so often the case with episodic films, some parts work really well, while others offer more dignified boredom or just plain bland gags. Director Jessie Nelson has directed some quite wonderful moments. There's no question that the film offers scenes that either really get to the heart, while spreading some beautifully schmaltzy Christmas cheer a la Hollywood, or that have some really hearty laughs to offer. But overall, its staging is too unbalanced and completely overstuffed. At some point, the individual wheels just don't mesh, creating an arguably bumpy mess that quickly grates on the audience's nerves.

The ensemble is well chosen in its own right. But the mere fact that Diane Keaton plays the hysterical overmother, as she has actually always done in recent years, or Amanda Seyfried isn't allowed to do very much more than look wide-eyed in the area, shows how little use is made of the potential of the actors, who are good in themselves. Even Alan Arkin, who is always reliable in his own right, only delivers good average here. Surely, in a light family comedy like this no great acting should be expected anyway. But when an ensemble that is so good in itself is squeezed into such stereotypical roles, it's just disappointing.

There are scenes where you actually forget all the movie's flaws for a few minutes and are enveloped by a warm feel-good cloak. But unfortunately this is always ripped away with full force and you have to wade through a jumble of clichés and hysteria again before the next nice scene comes along. And even if these successful moments make sure that the movie is better than many other Christmas comedies, they are not enough to compensate for all the weaknesses. And so, in the end, the only sobering conclusion remains: a lot of playful potential and too little originality make Christmas with the Coopers not exactly a feast for lovers of US Christmas movies. And therefore there is also only one: Conditionally worth seeing

Cinema trailer for the movie "Every Year Again - Christmas with the Coopers (USA 2015)"
Loading the player ...