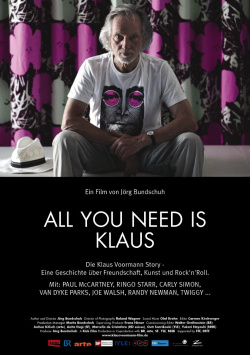 All you need is Klaus - The Klaus Voormann Story

Do you know what the Beatles and the NDW band Trio have in common? What the Bee Gees and B.B. King have in common? Or what the classics You're so vain by carly Simon and Without you by Harry Nilsson have in common? The answer is Klaus Voorman. Now many will ask: who the hell is Klaus Voormann? Only die-hard Beatles fans and music specialists might know the name. Yet the musician and graphic artist has been an important part of music history and pop culture from the 60s to the 80s ever since he first met the then unknown Beatles as an art student in Hamburg in 1960. The wonderful documentary All you need is Klaus - The Klaus Voormann Story now pays appropriate tribute to Voorman.

The framework for the documentary is the recording of the album A Sideman's Journey, which Voormann recorded together with companions such as Paul McCartney, Ringo Starr, Joe Walsh from The Eagles, Dr. John or Yusuf aka Cat Stevens. Embedded in the impressions of the musically truly great sessions, the various stages of Voorman's musical career are traced using interviews, photos and rare film footage. From his first meeting with the Beatles, the years in which he lived with them in a shared flat in London and was the first German to win a Grammy for the record cover he designed for the album Revolver, from his first steps in the music business as bassist of the Manfred Mann Band and later in John Lennon's Plastic Ono Band to his great successes with Ringo Starr, Carly Simon in the 70s and as producer of the band Trio and their hits like Da Da Da in the 80s, entertaining, informative and damn likeable Voormann is portrayed here by director Jörg Bundschuh.

What makes this documentary so worth watching, besides the music-historical aspect, is that it becomes clear again and again that Voormann was only ever about art and friendship, never about fame. He would have had enough opportunities to become a real celebrity. That he is sometimes called the 5th Beatle doesn't come from anywhere. His influence on the band should not be underestimated. But although he was instrumental in some of the very big moments in the history of pop and rock in the 60s and 70s, Voormann always kept himself in the background. It was more important to him to be musically convincing and to deliver first-class work than to be the center of media attention.

When, for example, it is revealed how the striking beginning of You're so vain came about or how his appearance in Hamburg influenced the appearance of the Beatles, music fans are likely to go into raptures again and again. But also the quite intimate look at the recording sessions for A Sideman's Journey offers quite a few great moments. All this makes All you need is Klaus - The Klaus Voormann Story an interesting, rousing, humorous, but in some moments also moving documentary that music lovers in general and Beatles fans in particular should not miss. Absolutely worth seeing

Cinema trailer for the movie "All you need is Klaus - The Klaus Voormann Story (Deutschland 2009)"
Loading the player ...