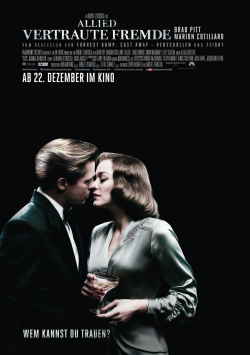 1942: Canadian pilot Max Vatan (Brad Pitt) infiltrates occupied Casablanca to take out the German ambassador on behalf of the British Special Operations Executive. He is to be helped by French resistance fighter Marianne Beaus&eacute;jour (Marion Cotillard). The two agents are masters of deception, which is why it is not difficult for them to pose as a couple in love. But in the course of the dangerous mission, the feigned feelings turn into real passion and back in London, Max and Marianne try to give their love a chance. And indeed, they seem to be succeeding - until Max receives shocking news.

With Allied - Familiar Strangers, director Robert Zemeckis (Forrest Gump, Back to the Future) presents a classic spy thriller that is also a tragic love story at its core. The setting of the first act in particular naturally brings up comparisons to the classic Casablanca. But such a comparison isn't really appropriate. Not because Allied - Vertraute Fremde doesn't have what it takes to become a true classic of film history itself. But rather because the movie goes its own way despite some similarities and thus quickly detaches itself from any similarities to Casablanca. But even considered as a standalone work, the spy thriller struggles with some issues.

But first to the many positives. There's the visuals, where Zemeckis once again proves himself a master of his craft. The opening sequence is a good example of how much the film can benefit from strong imagery. This sequence is very leisurely staged, not to mention a bit plodding. But because of the great imagery, the viewer is still swept along and immediately hooked into the action. Also helping are the good actors. Between Brad Pitt and the once again excellent Marion Cotillard the chemistry is perfect, which helps that the story with all its twists and turns remains believable until the end.

The very big surprises were missing, however, since actually the title already betrays the biggest plot twist. Nevertheless, actors and director manage to entertain the audience well until the successful finale and offer them despite some lengths also decent tension and also a certain amount of emotionality. It's by far not the strongest film Zemeckis has delivered in recent years. And it can also be accused of missing some human warmth that would have been needed to make the finale perhaps a little more emotional. But all in all, Allied has become a really good and gripping movie, which looks extremely powerful especially on the big screen. For this there is then also - with small deductions - a deserved: Absolutely worth seeing!