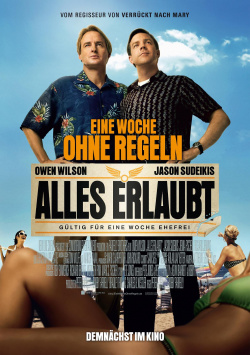 All's fair - A week without rules

The Farrelly brothers have struck again. Even though since their mega-hit "Crazy for Mary" they have only managed averagely successful comedies, they stick to their brute humour. This is also the case with "Alles erlaubt - Eine Woche ohne Regeln", a relentless slapstick comedy that will have you shaking back and forth between being embarrassed and guffawing.

The fun centers on friends Rick (Owen Wilson) and Fred (Jason Sudekis), both of whom are happily married but still controlled by their adolescent sex drives. While physical union rarely happens in their bedrooms at home anymore, the two men's erotic fantasies run rampant. And their wives Maggie (Jenna Fischer) and Grace (Christina Applegate) hardly ever play a leading role in them. But eventually enough is enough for the women and they engage in a daring experiment to save their marriages: they give their husbands a free pass, a week off in which they can do whatever they want. Rick and Fred are convinced that now a dream will come true and they will have a week of continuous sex with the hottest women in town. But the reality is a little different.

Who already gets red ears at obscene words, which should make "Alles erlaubt - Eine Woche ohne Regeln" a big bow. Because alone what is delivered here verbally, is hard to beat in obscenity. But who knows the films of the Farrellys, knows that the two are not satisfied with that. Once again, the visual gags push the boundaries of good taste - and far beyond. Male genitals in close-up, all kinds of appetizing bodily fluids distributed in an admittedly original way, and much more ensures that the laugh gets stuck in your throat many a time.

But as with "Crazy for Mary" or most recently with "After 7 Days - Haggard", the Brachial brothers always manage to garnish the crude events with charm and heart, so that the collection of ordinary little jokes becomes great fun. Sure, the whole thing is flat and mostly far below the belt. And in principle, the film is a prime example of mendacity, hiding behind the facade of sex jokes and fecal gags, but an extremely prudish morality, which is served at the end also quite thickly. And yet the film makes fun.

It is this unrestrained way, with which the Farrellys give their main characters to ridicule, which leads again and again to real laughs. Where other movies of this genre, like the third part of "Big Mama`s Haus", come along similarly crude, but always chicken out of the consequences and therefore seem extremely uptight and just stupid, the Farrellys just go one step further and are consistent enough to justify their journey into the lower humor regions. This is still a matter of taste, but if you like US comedies of the particularly crude kind, you will have a lot of fun with this mixture of "Hangover" and "Crazy for Mary". Worth Seeing