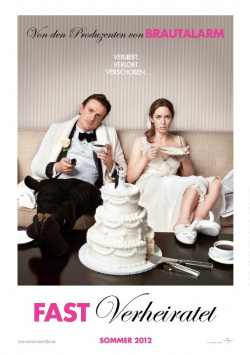 With the comedy Never Have Sex With Your Ex Again, director Nicholas Stoller and his co-writer and lead actor Jason Segel, with the help of producer Judd Apatow, were already able to score a big success. So it was only a matter of time before the three would reunite for a new project, especially since Stoller and How I Met Your Mother star Segel are also close friends. With the romantic comedy Almost Married, the team is now trying to repeat the success of Never Sex With Your Ex Again. And while they may not have succeeded, at least at the American box office, it's fair to say that they've significantly outdone their first collaboration here in terms of quality.

Almost Married tells the story of chef Tom (Segel) and his girlfriend Violet (Emily Blunt), who get engaged a year after meeting at a New Year's Eve party following an extremely romantic proposal from Tom. Everything looks like a rosy future, topped off by the prospects of Tom being on the verge of an important promotion. But then Violet receives the offer for her dream job, but it would take her from San Francisco to Michigan. Knowing how much this opportunity means to his Agebeteten, Tom puts his promotion and wedding plans on hold for now, and the couple moves to the sticks together. But while Violet thrives there, spending far too much time with her thesis advisor Winton (Rhys Ifans), Tom has to settle for a boring job at the sandwich shop. And as the couple slowly but surely drift apart, a possible wedding date also becomes a distant memory. When Violet receives another tempting offer, their already fragile relationship is put to the ultimate test...

Almost Married is a typical Judd Apatow production: at times, some pretty ribald humour is built into a charming story with plenty of wordplay, revealing a lot of heart beneath its somewhat crude exterior. And like many other Apatow productions, this film also has to struggle with the fact that it is over two hours long. Especially in the middle section, the comedy struggles with some scenes that some viewers might rightfully call length. For me, however, the whole thing still worked extremely well because the gag density, for one, is very high. Admittedly, not every joke hits the humor center of the audience and some of the jokes are more embarrassing than funny. But when the humor works - be it the dialogues or the physical gags - the laughs are really good and lasting.

The second aspect, which saves the film from some of its length, is the good chemistry between Jason Segel and Emily Blunt. The two make an incredibly cute couple and are just fun to watch. Also supporting characters like Violet's sister Suzie (Alison Brie, known from the series Mad Men and Community) and Tom's best friend Alex (Chris Pratt), or Tarquin, Tom's new boss at the sandwich shop, played by US comedian Brian Posehn, and of course Rhys Ifans as a snobby professor with a very special talent increase the charm factor of the comedy significantly. Add to that a nice soundtrack and arguably the most beautiful wedding in recent film history and you have the perfect romantic comedy for fans of slightly cruder comedy.

Fast Married is not highbrow entertainment, not a film that reinvents the genre or stands out for its particularly profound dialogue and fleshed out characters. It's simply a nice, endearing comedy with charming actors, some really good gags and a lot of heart. And as such, it's definitely one of the better works Hollywood has produced from this genre in the last two years. Therefore, if you could laugh at movies like Never Sex With Your Ex Again or Bride Alarm, you definitely shouldn't miss Fast Married. Worth seeing!!!