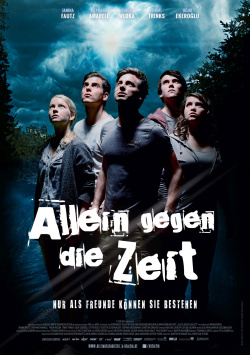 Alone Against Time - The Movie

Ben (Timon Wloka), Leo (Janina Fautz), Özzi (Uğur Ekeroğlu), Sophie (Stephanie Amarell) and Jonas (Timmi Trinks) have almost made it. They are about to graduate from high school and are enjoying what will probably be their last class trip. But while visiting the cathedral of Hildesheim there is an explosion and the friends are separated. Soon it is clear that they have fallen into the clutches of a dangerous sect who are planning a mystical ritual around the legendary Irminsul statue. And one of them, of all people, is to play a central role in it. To prevent the ritual, which will have catastrophic consequences for mankind, begins for the friends a fast-paced and dangerous race alone against time.

In 2010, the children's channel KIKA, of all places, surprised with an exciting adventure series that was definitely of international standard and could receive numerous awards. Described as 24 for Kids, the series Allein gegen die Zeit (Alone Against Time), which was told in real time, told exciting adventures with a fantasy touch in two seasons. Its success on television has now led to the real-time concept being transferred to the big screen. Ben, Leo, Özzi, Sophie and Jonas have this time just not a few hours, but only 90 minutes to pass their next great adventure.

With the exception of Ruby O. Fee, who has been replaced by Stephanie Amarell as Sophie, all the main actors from the series are involved in Alone Against the Clock - The Movie. Even if the typical teenage problems that want to be discussed while the young heroes are on the run from the cult members or the police seem a bit contrived and clichéd, director Christian Theede (Im Weissen Rössl) has succeeded in making a solid adventure film for a youthful target audience. The tension is on a decent level, the few effects are well implemented and the young actors do their thing quite convincingly.

Sure, as an older viewer you have to roll your eyes here and there, because the dialogues are very flat and you are confronted with a lot of clichés. But the film is primarily made for fans of the series. And for them, the reunion with beloved characters, but also the mystical adventure they have to go through, should work all the way. And therefore, despite some clear weaknesses, there is, on balance, a very clear: Worth seeing!

Cinema trailer for the movie "Alone Against Time - The Movie (Deutschland 2016)"
Loading the player ...