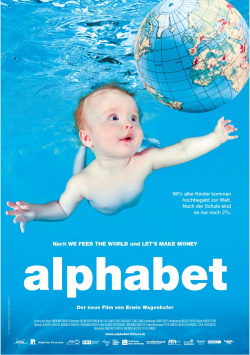 The world around us is constantly changing. These are changes that require some adjustment, as they often bring with them problems that can only be effectively countered with a trained mind. It is all the more surprising, then, that one aspect of our lives that seems to continually resist drastic change is schooling. Here, people cling to old patterns that have long since become inadequate to meet the demands of modern life, especially in economic terms. Is it because of the ever-increasing pressure to perform that the academic performance of young people seems to be getting worse and worse? Or are the standards used in our schools really hopelessly outdated? If this is the case, what would have to change to ensure that the learning potential that lies dormant in young children is adequately challenged and encouraged?

Filmmaker Erwin Wagenhofer explores these and other questions in his new documentary Alphabet. In it, he shows examples in which the maxim of achievement has a rather opposite effect on education and reveals how much children can benefit from allowing their minds to develop freely. He visits young people who suffer from the pressure of our society to perform or who are unable to meet it, resulting in a lack of perspective that is not very demanding. But he also introduces people who had the courage to break out of the given patterns, to defy prejudices or simply to try something new for once.

Here, for example, there is a reunion with Pablo Pineda Ferrer, known from the surprise hit Me Too - Who wants to be normal. The Spaniard talks about how he fought for his education against all odds, eventually becoming the first European with Down syndrome to graduate from university. But Frenchman Andr&eacute; Stern, a master guitar maker, journalist and composer, also has his say, recounting how he acquired his knowledge without ever having attended school.

Alphabet touches on many interesting topics that should definitely be discussed and thought about deeply. Unfortunately, the strength of the theses and topics is contrasted by a very sluggish production, which drags the film unnecessarily with some far too long sequences and thus accepts to lose actually interested viewers to the resulting boredom. In addition, some theses are simply presented too uncritically, which is also not exactly conducive to the very important subject.

No question, as already with We feed the World and Let`s make Money, Erwin Wagenhofer has also presented with Alphabet in large parts an interesting documentary on an important topic. Given the complexity of the subject matter, however, it would have been desirable if Wagenhofer had dispensed with a few artistically valuable long takes and opted for a denser production that would have presented a few more sides of this issue as a basis for discussion. As it is, Alphabet has become an important film, but also a very tough one that unfortunately never fully exploits its potential. As a conversation and thought-provoking film, however, well worth seeing!

Cinema trailer for the movie "Alphabet (Österreich/Deutschland 2013)"
Loading the player ...