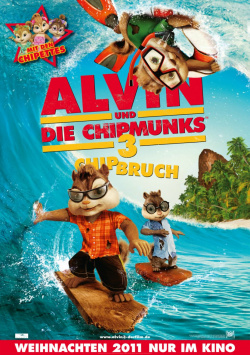 Alvin and the Chipmunks 3 - Chip Break

They're Back! After successfully conquering movie screens in 2007 and 2009, singing chipmunks Alvin, Simon and Theodore return for their third feature film adventure - and this time they've brought along Chipettes Jeanette, Brittney and Eleanor as squeaky-clean reinforcements.

Dave (Jason Lee) is still sacrificially looking after the Chipmunks and the Chipettes as foster father and manager. Dave has to learn once again how difficult this task can be when he wants to take the chipmunks on a cruise ship to the World Music Awards, where his fosterlings are to be honored. But after Alvin in particular keeps causing chaos on board, the captain threatens to throw Dave and the little stars off the ship. But it doesn't come to that, because another prank of Alvin catapults first the chipmunks and then Dave and his permanent opponent Ian (David Cross) with a paraglider from board directly into the wide sea. On a deserted island, the Chipmuks and the Chipettes find refuge. But while Dave and Ian launch a desperate search for the fluffy superstars from the other end of the island, the chipmunks get caught up in one adventure after another and soon discover they're not alone on the island after all.

When American singer-songwriter Ross Bagdasarian created a fictional musical group consisting of his alter ego David Dave Seville and the three chipmunks Alvin, Theodore and Simon in 1958, he couldn't have had the slightest idea of the success story he would unleash. The very first song of Alvin and the Chipmunks, the Christmas song The Chipmunk Song (Christmas don`t be late) sold several million copies in no time and was awarded with many prizes. Countless albums, cartoons and video films later, Alvin and the Chipmunks also conquered the cinema screens in 2007.

The success of the first two films made another sequel inevitable. The makers didn't take any real risks in doing so. Part 3 offers the inclined viewer exactly what can be expected after the first film. Cute chipmunks, a lot of chaos and some hits (e.g. by Lady GaGa or Katie Perry) in squeaky design. If you like that, you will undoubtedly be well entertained, even if the humour this time turns out a bit more flat and the whole thing seems less spectacular than in part 1, despite the spectacular finale.

After all, the adventurous setting on the deserted island ensures that the third film has a bit more entertainment potential than the very weak part 2.

The gags are, with a few exceptions, kept extremely simple and can at best make small viewers laugh. Only Simon, who shows a slightly different side after a small accident on the island, and the cute Theodore provide some really nice moments. But the fact that the chipmunks, and unfortunately especially the Chipettes, use every opportunity to sing their squeaky song, stifles every nice idea. But even otherwise, the film never really exploits its comedic potential. For instance, there's island resident Zoe (Jenny Slate), who, in a nod to the Tom Hanks film Cast Away, has developed a very personal relationship with not one, but several balls over the years. What starts out as quite a nice parody in the first moment degenerates in no time at all into a completely exaggerated and unfortunately no longer funny silliness.

So the bottom line is that Alvin and the Chipmunks 3 is not quite as entertaining as part 1, but overall all little fans of the singing little animals should like it very much. And that's why the conclusion for exactly this target group (but really only for them) is: Worth seeing! But if you are older than 10 years, you can safely give this sequel a wide berth.