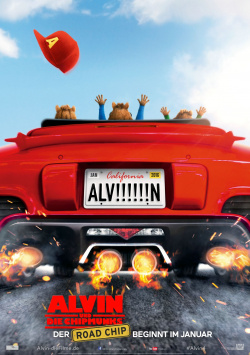 Alvin and the Chipmunks - Road Chip

They're Back! After successfully conquering cinema screens for the first time in 2007 and following the debut with two equally successful sequels, the singing chipmunks Alvin, Simon and Theodore now return for their fourth feature film adventure after a four-year hiatus. We remember: The Chipmunks were discovered by the unsuccessful musician Dave (Jason Lee) and after some turbulent adventures they became big stars. As such, the Chipmunks toured the globe, causing all sorts of hullabaloo along the way with their female counterparts, the Chipettes.

Meanwhile, the success has died down a bit. Dave is a successful music producer who has little time for his protégés, who, now that they are no longer on tour, are plagued by everyday boredom. When they have to suspect that Dave wants to get engaged to his new girlfriend Samantha (Kimberly Williams-Paisley) during a trip to Miami, this is the starting signal for a new adventure for the three Chipmunks. Because since they definitely don't want to be related to Samantha's annoying son Miles (Josh Green), the engagement must be prevented at all costs. Together with Miles, the Chipmunks set off for Miami, which threatens to end in absolute chaos after only a short time.

When American singer and songwriter Ross Bagdasarian created a fictional musical group consisting of his alter ego David Dave Seville and the three chipmunks Alvin, Theodore and Simon in 1958, he couldn't have had the slightest idea of the success story he would set in motion. The very first song of Alvin and the Chipmunks, the Christmas song The Chipmunk Song (Christmas don`t be late) sold several million copies in no time and was awarded with many prizes. Countless albums, cartoons and video films later Alvin and the Chipmunks conquered 2007 then also the cinema screens.

Who believed that the creators have used the longer break between part 3 and part 4, to bring some new momentum in the franchise, is very much mistaken. Because also with the newest film again no real risk was taken. Alvin and the Chipmunks - Roadchip runs again rigidly after pattern and offers the inclined viewer exactly what may be expected (or feared) after the first three films: Cute Chipmunks, lots of chaos and some familiar hits in a helium squeak design. If you like that, you'll undoubtedly be well entertained, even if the humor once again falls extremely flat and the family-friendly message is laid on too thick, especially at the end. However, the Chipmunks will not be able to win new fans with this very simple adventure. Therefore: only for very hard-boiled fans worth seeing!

Cinema trailer for the movie "Alvin and the Chipmunks - Road Chip (USA 2015)"
Loading the player ...