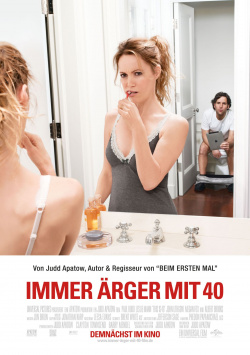 Actually, married couple Debbie (Leslie Mann) and Pete (Paul Rudd) were born just days apart in the same year. Yet this year, instead of celebrating her 40th birthday like hubby Pete, Debbie is only celebrating her 38th. Because she just doesn't feel ready for 40 yet. There's still so much she wanted to get done and experience before then, so two extra years is just necessary. Pete has no problem playing the game for his wife. And even when she starts changing the family's menu and changing all the pleasant aspects of everyday life with health-conscious and responsible things, Pete takes it in stride on the outside. But inside he is seething. He withdraws more and more often, doesn't tell Debbie that his record label is about to go out of business and that he still regularly gives his father (Albert Brooks) money that he would actually need much more urgently right now. The fact that his daughters Sadie (Maude Apatow) and Charlotte (Iris Apatow) also need constant attention doesn't make things any easier. And so the tensions increase more and more and the feelings decrease more and more, until the question arises whether the love is still enough to really spend the rest of their lives together.

The married couple Debbie and Pete are already known from the comedy The First Time, where the two, however, only played a rather minor role. Nevertheless, Judd Apatow has now put them at the center of their own story in Always Trouble with 40, which he has once again staged as a mixture of very true-to-life moments and crude humor. In front of the camera again family members like wife Leslie Mann and the two common daughters Maude and Iris, but also many friends like Paul Rudd and Jason Segel may act. The family atmosphere that this creates on the set is a significant factor in the functioning of Judd Apatow's films. This is because the good chemistry between the actors creates a certain credibility that makes the characters very authentic figures, despite some exaggerated characteristics.

So then many viewers will definitely be able to recognize some situations from the chaotic everyday family life of Debbie and Pete. This is especially in the first half of the film mostly very funny, but at the same time does not spare more unpleasant moments. Although Always Trouble with 40 is first and foremost a comedy, but since it wants to depict not only the highs but also the many lows of a marriage, quieter and dramatic moments also come into play again and again. This mixture has, after all, already distinguished Apatow's earlier films, but rarely seemed as true to life as it does here.

While some of the dialogue is quite great and the film has many nice touches to offer, such as the daughter obsessed with the series Lost (any fan of the series will be very pleased with the amusing take on the last episode) or the revelations of the ways in which one wishes one's partner to die, other aspects simply fail to convince. The somewhat too inflationary use of vulgar dialogues and unnecessary side characters clouds the overall positive picture a bit. The impression remains that the film didn't really need the over two hours running time and would have worked much better and more coherent in a slightly tighter version. Sure, it's simply Apatow's style to counteract threatening kitsch through the regular use of below-the-belt gags. But in the long run, it's just not as funny as it was in his first films, instead coming across as a bit too forced and predictable.

No question, Always Trouble at 40 is a charming and funny film especially for those viewers who can laugh at typical Apatow humor. When Debbie makes one of her daughter's classmates cry because he made unflattering comments about Sadie on the Internet, or when Pete then clashes with that boy's crazed mother (Melissa McCarthy), it's just as funny as the men drooling without restraint at the sight of Megan Fox in a skimpy bikini. Still, the comedy too often lacks pace, especially in the second half, as the story keeps getting unnecessarily bloated. It's nice and amusing, but unfortunately not much more. However, if you liked The First Time or How Life Plays, this marriage crisis can also be recommended to you. Therefore: with deductions worth seeing!