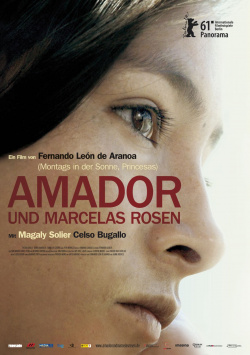 Actually, Marcela (Magaly Solier) was determined to leave her boyfriend Nelson (Pietro Sibille). The farewell letter is written and the suitcase is already packed. But at the bus stop Marcela collapses. During the subsequent examination at the hospital, she learns that she is pregnant. Marcela knows that she cannot leave Nelson now. But the money he makes selling roses on the black market will not be enough to support a young family. Therefore, Marcela decides to earn some extra money while her pregnancy allows. As a nurse, she is supposed to take care of old Amador (Celso Bugallo). He makes it more than difficult for her at first with his closed, grumpy manner. But when the old man realizes that Marcela is pregnant and she tells him that she has never told anyone about it, an unusual friendship begins to develop between the two. But then something happens that completely overturns Marcela's plans and forces her to make a decision that will have consequences for her entire future...

Amador and Marcela's Roses is a very quiet arthouse drama that tells its story with moments of quiet humor and unobtrusively interwoven poetry. Access to it proves a little difficult at the outset. The staging and especially the taciturn Marcela make the action a bit unwieldy. One catches oneself wanting to shake Marcela so that she finally says something or answers the phone instead of standing rooted to the spot. But filmmaker Fernando León de Aranoa has a definite goal with his slow-paced storytelling, so it's well worth getting involved in this not-always-easy endeavor.

The scenes in which Marcela and Amador become friends not only have a lot of charm, but also a tremendous warmth that transfers to the audience as well. It's not meant to give too much away at this point about how the story goes on from there. It should be said, however, that the way in which the events are propelled to their surprising and very coherent finale makes one forget the plodding pace of the beginning.

Cinema trailer for the movie "Amador and Marcela's Roses (Spanien 2010)"
Loading the player ...