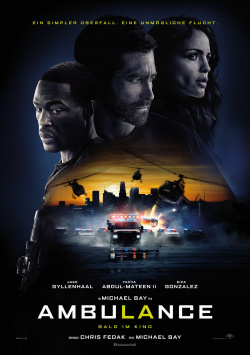 Will Sharp (Yahya Abdul-Mateen II) is desperate: his wife is seriously ill and desperately needs very expensive treatment that is not covered by insurance. When he asks his adopted brother Danny (Jake Gyllenhaal) for help, the latter persuades the veteran to help him rob a bank. The whole thing is a perfect and, above all, lucrative plan, Danny promises. But of course the robbery doesn't go off as planned. And so the brothers soon find themselves in a hijacked ambulance, with paramedic Cam Thompson (Eiza González) fighting for the life of a cop who has been shot, while the city's entire police force and heavily armed task forces hunt for Will and Danny....

With the remake of the 2005 thriller "Ambulance" from Denmark Michael Bay reports back in the cinema. Of course, in the US version everything is a bit bigger, more action-packed and more bombastic. So it's not just about a paltry €500,000, as in the original, but about $32 million. Bay also celebrates his action orgy for well over two hours, while the original only lasted a little more than 80 minutes. So at least it can be said that Bay has put his own stamp on the basic idea, instead of delivering a pure copy of the original. That must be rated absolutely positive with all justified criticism of the film.

Before the camera Bay has also gathered an inherently really good ensemble. In conjunction with the exciting story and fast-paced action, this should have actually resulted in a really good film. But that is unfortunately not the case for two reasons in particular. First, there is the fact that Michael Bay is simply no friend of subtlety. No matter if it's the action, the dramatic moments or the humor - Bay always hits it with full force. So the action is quickly tiring, the dramatic moments seem completely overstretched and manipulative and the humor is almost inappropriately silly. All of this is already familiar from Bay. But he has this in earlier films (about which he even lets his protagonists talk) also times clearly better and more balanced get.

The second point that stands in the way of a consistently positive overall impression is the camera. It doesn't allow the audience to rest for even a second. Whether it's drone footage of L.A. or close-ups of faces, the camera is constantly shaking or panning quickly, which is then accentuated by hectic cuts. This is extremely exhausting in a film that lasts over two hours. It's a pity, because some of the drone shots are really spectacular. There is just no time to fully enjoy them.

"Ambulance" has some good premises and strong moments. But overall, Bay just doesn't manage to exploit the potential with his slash-and-burn style in such a way that action fans really get some good fodder here. Too long, too hectic and also in all other areas just too much of a good thing - and therefore only with restrictions still: worth seeing!

Cinema trailer for the movie "Ambulance (USA 2022)"
Loading the player ...