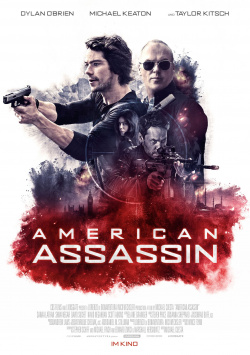 A romantic vacation turns into a nightmare for Mitch Rapp (Dylan O`Brien) and his fiancée when terrorists storm the beach and shoot people at random - including Mitch`s great love. From then on, the young man knows only one goal: revenge! Over the next few months, he does everything in his power to track down the masterminds behind the attack and then kill them. This also brings him into the sights of the CIA, who see great potential in him. He is to be trained as an elite soldier by war veteran Stan Hurley (Michael Keaton) to take out not just one, but as many terrorist cells as possible. And soon Mitch is sent on his first mission, where he is to stop a large-scale conspiracy that could cost the lives of many thousands of people. But the enemy is always one step ahead of him - no wonder, since he was trained by the best of the best - Stan Hurley.

American Assassin is based on the successful novels of bestselling author Vince Flynn, who died in 2013 at the age of just 46. After first having CIA veteran Mitch Rapp go on an adventure in 1999, he followed up with his prequel in 2010 after several more successful books. This book was particularly well received by critics and fans and provides the perfect basis for the start of a planned film series. Whether this will actually happen or whether it will remain with a one-off cinema release is still questionable after a rather weak performance at the American box office so far.

No question, the ideology this film espouses can safely be called questionable. Apart from that, Michael Cuesta (Homeland, Kill the Messenger) has directed an absolutely solid action thriller, which can convince especially at the beginning with a good build-up of tension and a credibly constructed dramaturgy. Although Dylan O`Brien as the ice-cold avenger is not quite the ideal cast, but overall he does a good job. And Michael Keaton proves once again that he can also get a lot out of quite clichéd roles.

Towards the end, the story increasingly sinks into implausibility and hectoring patriotism. True, there is a rather spectacular finale. But somehow the air is already out of the story, as well as from the initially still threatening antagonist and the whole thing seems very interchangeable. Still: If you like conventional action fare and appreciate agent thrillers like the Jack Ryan movies, you will be well entertained here. And for that there is a clear: Worth seeing!