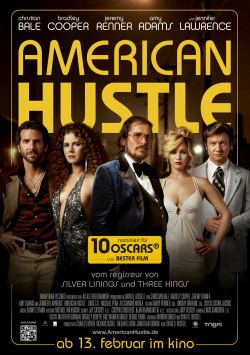 Irving Rosenfeld (Christian Bale) is convinced he leads the perfect double life. On one hand, he maintains a middle-class facade as the owner of a couple of laundromats and a devoted family man. On the other, he and his mistress Sydney (Amy Adams) amass a handsome fortune through clever scams. Irving believes his scam is foolproof and has no idea that overambitious FBI agent Richie DiMaso (Bradley Cooper) has long been on his trail. When DiMaso succeeds in setting a trap for the pair of con artists, Irving and Sydney must strike a deal to stay out of jail. They are to use their criminal talent to prove corruption and ties to the mob to Camden Mayor Carmine Polito (Jeremy Renner). For DiMaso is certain that the popular politician does not wear a clean slate behind his clean-cut image. But events soon threaten to spiral out of control when Irving's cuckolded wife Rosalyn (Jennifer Lawrence) also gets involved in the operation.

For his latest film, American Hustle, director David O. Russell has gathered a proven team around him. In addition to Bradley Cooper and Jennifer Lawrence, the dream team from his last big screen hit Silver Linings, Amy Adams and Christian Bale from The Fighter are also back. Bale, in particular, once again proves himself to be a top-notch Method actor here. Having lost a drastic amount of weight for the role of the drug-addicted Dickey in The Fighter, he's put on a fair amount of chub for American Hustle, surpassed only by his awful hairstyle (if you can call it that) as an insult to the eye. This Christian Bale has absolutely nothing in common with the muscle-bound Batman anymore - and that's a good thing. Because in combination with his extremely good-humoured acting, the actor can disappear completely behind this character and as a viewer you don't even think once that the hero from The Dark Knight is rubbing his unsightly beer graveyard with pleasure.

But Bale is only one of the many cogs that move in perfect harmony with each other in American Hustle. The rest of the cast also all deliver wonderfully light-hearted performances. Bradley Cooper and Jeremy Renner also with nasty hair, Robert De Niro entirely without, Amy Adams as a sly sexpot, Jennifer Lawrence as a somewhat crude but thoroughly shrewd housewife, as well as in a small, but fine supporting role, comedian Louis C.K. (Blue Jasmine) - they all make this crook comedy great acting cinema of the particularly enjoyable kind.

Besides the actors, the perfect 70s set, the matching clothes, the great soundtrack matched to the respective scenes as well as the very engaging camerawork are also among the aspects that make this film so successful. But the film's greatest strength is arguably its Oscar-nominated screenplay, which is bursting with wonderful wordplay and amusing twists. It is then the excellent interplay between the screenplay, the actors' performances and the direction that prevents the story from degenerating into a silly farce and the characters into jokes.

Maybe American Hustle is not the most dramatically profound of all the Oscar contenders. It's certainly first and foremost a diverting entertainment film, not cerebral arthouse cinema. The reason the comedy is so successful and has been nominated for numerous film trips is because David O. Russell has proven once again that you can deliver perfectly composed entertainment without insulting the intellect. He shows that great actors and a good script are far more important than special effects and 3D visuals, and that actors don't always have to look like they've been licked for you to enjoy watching them. And that's exactly why American Hustle isn't a really important movie, but a very good one that offers over two hours of perfect entertainment. What more could you want! Absolutely worth seeing!