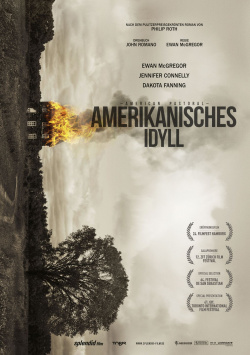 It's a truly American idyll that Seymour the Swede Levov (Ewan McGregor) has built for himself: he marries former beauty queen Dawn (Jennifer Connelly), takes over his father's (Peter Riegert) successful glove factory, and moves his wife and their daughter Merry together to a beautiful farm in the small town of Old Rimrock. There the girl grows up well protected and actually happy. Nevertheless, she develops into a rebellious teenager (Dakota Fanning), who rebels not only more and more radically against the Vietnam War, but also against the values of her parents. When an attack occurs in the small town, Merry falls under suspicion, whereupon she goes into hiding. For her father, a world comes crashing down. He cannot understand what has become of his little girl. From now on, he does everything he can to find Merry again and bring her back to the sheltered life he has so carefully built for her.

With his directorial debut American Idyll, Ewan McGregor has taken on quite a lot. For Philip Roth's Pulitzer Prize-winning novel is one of the very great American novels of the last twenty years. The way Roth's language captured the feeling of life in the 60s, as well as the complexity of the story, make a film adaptation an extremely difficult undertaking - especially when you're not only the director, but also the lead actor.

No question, McGregor's directorial debut has some quite strong moments and very positive aspects. The set captures the 60s atmosphere very well and most of the cast deliver very good performances. In addition, the story is simply very rousing, even if it is told here in a highly condensed form. But it also becomes clear again and again that screenwriter John Romano is no Philip Roth and that Ewan McGregor has a good knack for directing his co-stars, but is a bit overwhelmed with the dramaturgical aspects. Another problem is that Hannah Nordberg, who plays Merry as a 12-year-old girl, is so strong and convincing that Dakota Fanning just can't touch it. The stuttering in particular, which Merry suffers from, comes across as too much of an effort on Fanning's part to be truly believable. This, of course, also minimizes a bit the emotional impact created by the rift between Merry and her parents.

In addition, many plot elements come up short and therefore seem a bit superficial. Still, if you're unfamiliar with the book or can detach yourself from a direct comparison, American Idyll is a thoroughly strong drama that may have its weaknesses, but they're outweighed by its many strengths. The film is a gripping portrait of a society in transition and a moving story about a father's unwavering love for his daughter. Not a masterpiece like the book, but still absolutely worth seeing!