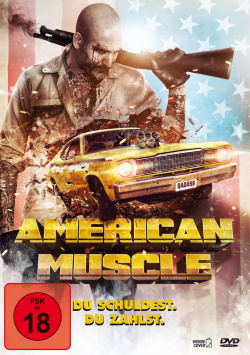 Film: John Falcon (Nick Principe) sat for ten years, betrayed by his own brother Sam (Todd Farmer) and his great love Darling (Robin Sydney). Now John is thinking of revenge. Revenge on all those who once called themselves his friends and who abandoned him ten years ago. And as the crowning glory, he'll take Sam to task. With his pumpgun and his old 68er Plymouth Duster he starts a bloody revenge campaign, which initially goes according to plan. But when Sam gets wind that his brother is free again and wants to take revenge on him, he also makes heavy guns...

With "American Muscle" the filmmaker Ravi Dahr has made a directorial debut in the best Grindhouse tradition. His style is sometimes reminiscent of a mixture of the Jason Statham hit "Crank" and the early Tarantino. However, the script does not reach his class. Because the very simply knitted revenge story doesn't shine with clever dialogues, but rather relies on the politically not always correct staging. Here it goes brutally, badly, cynically and also a little bit sexist to the thing. But Dahr always scatters enough irony into this mix to avoid the danger of being dismissed as an annoying piece of macho cinema.

If you recognize the completely exaggerated violence, the exaggerated clichés and also the camera angles that are constantly focused on the rather intimate body regions of the actresses as an ironic stylistic device, then "American Muscle" is a lot of fun. Thus, the very one-dimensional game by main actor Nick Principe is also absolutely fitting and provides some scenes with extremely amusing moments. All in all, what Ravi Dahr has put together here with a mini-budget can really be regarded as a decent directing debut - at least if you estimate the Grindhouse cinema of the 70s. This is not particularly demanding, profound or even morally valuable. And logic, too, always makes a wide berth of history. On the contrary. But that's exactly the attraction of films like "American Muscle", which represent such an entertaining contrast to the mainstreamware smoothed out by the studio bosses.

Since this is rather a brush against the grain, this relentless revenge campaign is also rather something for a manageable target audience that appreciates exactly those aspects of the film that many would dismiss as weaknesses. With a better script and a bit more coolness "American Muscle" could have been really great. So the whole thing is still a really decent grindhouse revival with a really effective picture language, especially regarding the small budget. For all those who can get involved with it, one thing is clear: Recommended!

Picture + Sound: The picture of the DVD pleases with its very atmospheric, dirty look, which is supported by the rather earthy coloring and the slightly overdrawn contrasts. The image sharpness is good, only here and there you can see slight blurring. However, these could also be a deliberately used stylistic device, as the film as a whole has a somewhat trashy grindhouse look to it. The sound is available in a decent Dolby Digital 5.1 mix, which reveals a pleasant dynamic when shooting or driving faster. Good!

Extras: As a bonus the DVD only has the trailer for the movie to offer.

Fazit: "American Muscle" is a brutal, dirty and politically not exactly correct B-Movie. The feature film debut of Ravi Dahr, which doesn't save on blood and lightly dressed ladies, reminds us of the over-twisted style of "Crank" in its best moments, but the whole thing lacks a bit of the elegant coolness of the early Tarantino, in order to be able to attest more than good entertainment value to this crude revenge campaign. The DVD is technically well done, but there is no bonus material worth mentioning. All in all this is enough for fans of rich grindhouse food for a decent one: Recommendable!