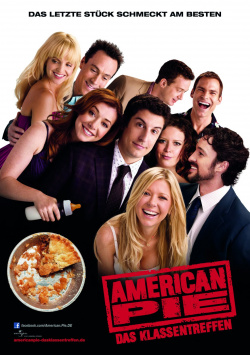 Ready for another piece of pie? Nine years after the last (cinematic) chapter in the American Pie saga, nearly all the stars of the first 1999 film return to take part in a reunion of a special kind. Over ten years have passed since Jim (Jason Biggs), Kevin (Thomas Ian Nicholas), Oz (Chris Klein), Finch (Eddie Kaye Thomas) and Stifler (Sean William Scott) pursued their efforts to lose their virginity. By now, their school days are long behind them and their days of debauched partying are long gone. Jim and Michelle's (Alyson Hannigan) marriage has seen better days. Oz (Chris Klein) is a second-tier celebrity who is still hung up on Heather (Mena Suvari) despite his relationship with the attractive Mia (Katrina Bowden). Kevin is sorely underused as a stay-at-home dad, and Stifler's days as the big alpha male seem to be well and truly over.

When the friends reunite for the big reunion at East Great Falls High School, they decide to relive the good old days for a weekend. But as expected, things go wrong - and so instead of party mood soon prevails hangover mood. Because even if their hormones are still going crazy, Jim and his buddies have to realize that they're not 18 anymore...

For those who feared that the American Pie franchise had become well-behaved and chaste after a nearly ten-year hiatus (the disappointing DVD sequels, which had little in common with the feature films except for the name, are simply ignored here), can breathe a sigh of relief. Directors Jon Hurwitz and Hayden Schlossberg, who are responsible for the Harold & Kumar films, continue to throw the characters, but especially poor Jim of course, from one flaw to the next in this new installment. That Jim even thinks about masturbation and sex after all the traumatic events from the first three films is actually a miracle. That his streak of bad luck does not stop here and his best piece is once again badly affected, is actually only consistent. But who after the opening sequence believes that Jim has already survived the most embarrassing, which is soon disabused.

No question, who liked the first part of American Pie, will be very happy about the reunion with the likeable clique. There are many obvious, but also some more hidden allusions to the old films, amusing appearances of old acquaintances and also some songs from the three previous films are recycled skillfully. The humour is as raunchy as ever, there are quite a few naked facts to be seen (one of the actors in particular shows a lot of guts) and numerous of the funny foreign-shame moments that have become a trademark of the franchise.

In the wake of the success of the first film, countless imitators have been released in cinemas and on DVD since 1999, always striving to raise the level of tastelessness and fecal humour to a more than unbearable level. But while they may have succeeded, with few exceptions, hardly any clone has come close to matching the popularity of the American Pie films. The reason for this can be observed again in this fourth installment. Because apart from the numerous gags, which are almost exclusively below the belt and shoot so many times over the border of good taste, the films have something that most imitators lack: sympathetic characters, who really grew on you in the course of the films. It was just the right mix of crudeness and charm that gave American Pie its cult status. And even though some of it has been lost over the years due to the wear and tear of the genre, American Pie: The Reunion still draws from what Paul and Chris Weitz kicked off in 1999. Fans of the first hour and all lovers of US comedies of the coarser kind should also enjoy the fourth piece of the pie. Because even if some bites taste a bit stale and you have the feeling in some moments to regurgitate, you leave the cinema satisfied, satiated and without a bad aftertaste in the end. No high-quality auteur cinema, but for all American Pie fans absolutely worth seeing!

Cinema trailer for the movie "American Pie: The Reunion (USA 2012)"
Loading the player ...