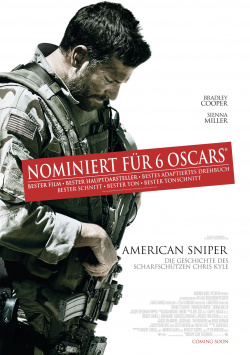 Few films have caused such controversy in the United States recently as Clint Eastwood's latest war drama American Sniper. In the film, Eastwood tells the story of Navy SEAL Chris Kyle (Bradley Cooper), considered the most accurate and successful sniper in American military history, with over 160 confirmed kills. Based on Kyle's autobiography, the film not only follows the soldier during his four deployments to Iraq, but also attempts to trace what a strain they are on his marriage to his wife Taya Renae Kyle (Sienna Miller) and on his own psyche. And it shows him trying to find his way back into normal everyday life after deciding against the military and for his family.

At first, Chris Kyle wasn't really thrilled about the idea of his book being made into a movie. But after director Clint Eastwood and producer and lead actor Bradley Cooper managed to convince him of their vision for the film, everything looked like a close collaboration between Kyle and the film team. But it wasn't to come, Kyle was shot and killed by an apparently traumatized veteran in February 2013. Now Eastwood and Cooper were particularly keen to uphold the honour of the sniper, who was a great hero to them as he was to many other Americans. And this is where the problem with the film lies. For Chris Kyle was precisely not only the great war hero, but also a highly controversial figure. Apart from the fact that he didn't always tell the truth in interviews, he was also accused of racism and sadism in some passages in his book and various interviews. To completely leave out this rather dark side of the sniper leaves a somewhat insipid aftertaste.

Of course, one could now argue that Eastwood was primarily concerned with showing what the beast of war can do to a person and what deep scars it leaves on soldiers. So the questionable aspects of Kyle's character and life only play a minor role. But the film doesn't deal enough with the time after the combat missions. After two hours of tracing the four missions in Iraq and some very dramatic confrontations with the enemy, there are only a few minutes left for the time after. What happens to veterans back home after traumatic experiences, how they cope with the stresses, and how the government and society take care of them are all touched on too superficially to really be considered the central message of the film. Had Eastwood dispensed with a few war scenarios and paid a little more attention to the difficult aftermath, it would have been guaranteed to legitimize many a controversial moment in his film.

However, the four-time Oscar winner is clearly trying to largely eschew the kind of swashbuckling patriotism usually so common to the genre of war drama. Meaningful close-ups of the US flag, for example, are not used here. It's not until the end credits, with their archival footage backed by an arguably conventional pathos soundtrack, that Eastwood makes up for everything he's done a pretty good job of avoiding before. In other respects, too, the film is properly convincing from a purely workmanlike point of view. The Oscar-winning sound is just as intense as the imagery, which exudes a high degree of realism. And Bradley Cooper's acting is also beyond reproach in most moments. All of these positive aspects continue to demonstrate what a good, moving film American Sniper could actually be. However, the completely uncritical approach to the main character, which unfortunately finally degenerates into glorifying hero worship by the final images, puts too big a shadow over the otherwise really strong production. Even if the film doesn't glorify the war itself, as it is so often accused of, it unfortunately comes across as too undifferentiated and uncritical in the end to be really convincing. However, Eastwood has certainly succeeded in creating good material for discussion and a stirring drama. And for that there is then also a: Worth seeing!