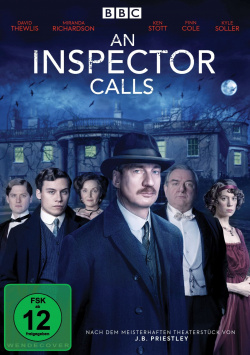 Content: It is a solemn evening on a manorial estate in 1912: The well-heeled Birling family has every reason to rejoice, because the engagement of their daughter Sheila (Chloe Pirrie) to Gerald Croft (Kyle Soller) finally brings together two influential entrepreneurial families. However, the good mood is clouded by the appearance of Inspector Gooles (David Thewlis). The policeman investigates the suicide of a young woman (Sophie Rundle). She was a former employee at the Birling factory. But as it turns out in the interrogation with those present, there was not their only connection to the family. And soon the question arises who really bears the responsibility for the suicide of the woman…

"An Inspector Calls" by J.B. Priestley has not only been performed at countless theatres all over the world, but has also been filmed several times. This new BBC production reveals once again that the piece has lost nothing of its topicality and significance even more than 70 years after its premiere. Social responsibility and exploitation of ordinary people by the upper classes are still important issues. Priestley exposes the hypocrisy of the upper class in the flourishing industrial age with a mixture of classic thriller in the best Agatha Christie style and enigmatic mystery drama. All of this culminates in a finale that is simply great in its slightly confusing way.

The adaptation by Aisling Walsh focuses on a reduced setting that is reminiscent of a chamber play for long stretches and is thus closely oriented to the stage play. Only in the flashbacks, which show the form in which the individual family members were connected to the dead woman, does this TV film distance itself from this narrative form in the best sense of the word "theatrical". Acting is based on experienced names such as David Thewlis, Miranda Richardson or Ken Stott, but also on young talents such as Sophie Rundle and Kyle Stoller. A great ensemble that can fit very well into the special atmosphere of the story.

Whoever has seen "An Inspector Calls" in the theater or who appreciates classic crime fiction with mysterious twist and timeless themes should definitely make use of this DVD. However, for those who are mainly interested in action or bloodthirsty murders, it's better to choose another movie. Absolutely worth seeing!

Picture + Sound: This TV production presents itself on the DVD in good picture and sound quality. The visual realization pleases with a good picture sharpness, which however shows some small weaknesses with the detail representation. The colouring is rather reduced, which fits very well to the atmosphere of the story. The sound present in a Dolby Digital 5.1 mix is determined by the dialogues so that the surround channels are only used to a limited extent. But since this fits very well to the story, the bottom line is clear: Good!

Extras: As a bonus there are two interesting features on the DVD: A short documentary deals with the new adaptation and its development. The second - and more interesting - illuminates the piece itself. The son of J.B. Priestley also has his say and reveals some exciting details about the play. Worth seeing!

Fazit: The play "An Inspector Calls" by J.B. Priestley was made into a thrilling film by the BBC. Great cast, atmospherically staged and still very current even more than 70 years after its premiere - this mystery thriller is actually always worth seeing, whether on stage or in the form of this TV adaptation. Audiovisually there is no reason to complain and the bonus material is also worth seeing. Clearly this means: Absolutely recommended!

Cinema trailer for the movie "An Inspector Calls - DVD (Großbritannien 2015)"
Loading the player ...