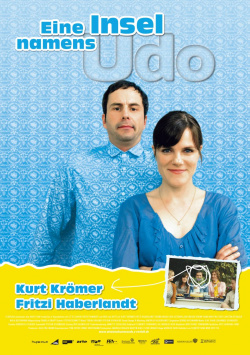 Although Kurt Krömer has said goodbye to television for now, fans need not mourn. For it is not only on stage that the comedian will remain with them. With An Island Named Udo, Krömer now also delivers his first leading role in cinema - and provides a really positive surprise.

Udo (Krömer) belongs to a fringe group. He suffers from low visibility, which leads to the fact that he is simply overlooked by his fellow men. Udo has made a virtue out of necessity and so he works extremely successfully as a department store detective. And on the side, he is able to treat himself to free coffee, invite customers over to watch TV in the evenings, or make himself at home in the camping section of the department store. But all that changes when Jasmin (Fritzi Haberlandt) enters his life. For the hotel manager is the first person who can immediately see Udo. Soon Udo has butterflies in his stomach for the first time in his life, which has unexpected consequences: because suddenly the newly in love department store detective is visible to the whole world. And Udo can't really handle that well, which puts the young happiness to a hard test right at the beginning.

An Island Named Udo may not elicit roaring laughter from the audience, may not offer any true gag fireworks. But that's not a bad thing either. Because this likeable little film provides a lot of good humour in its very own, rather understated way. The original story, which opens in a wonderful documentary style, and the charmingly drawn characters you just have to like. The gags are for the most part very funny, but sometimes reveal their true wit only when you think a little harder about the scenes in question after the fact. It's commendable that Markus Sehr doesn't resort to flat jokes in his feature film debut, but rather uses subtle wit. Even if the loud laughs are therefore rather rare, the permanent smile of the audience is guaranteed his work in any case.

In a humorous way Sehr addresses the increasing anonymity in our society, without coming across as accusatory, depressive or doctrinaire. With a light hand he wraps the almost sad subject matter into an enchanting and highly original love story, which is carried by two wonderful leading actors. While Fritzi Habermann finally gets to prove her comedic talent (again), Kurt Krömer surprises us by not being typical Krömer at all. It is true that in some moments the comedian flashes, as his fans know him from television and his live shows. But otherwise Krömer takes himself completely back and shows himself from a completely new, not less funny side. Where comedy colleagues play it safe and present the movie audience with exactly what they are used to from their star, Krömer dares to play against the audience's expectations. And that courage pays off, because as the hard-to-see Udo, Krömer is just adorable.

An Island Named Udo is a charming little film that shows that German comedies can be original, intelligent and, above all, really funny. Maybe not as mass-compatible as the films from Schweiger, but for lovers of romantic comedies beyond the mainstream more than recommendable!

Cinema trailer for the movie "An Island Named Udo (Deutschland 2011)"
Loading the player ...