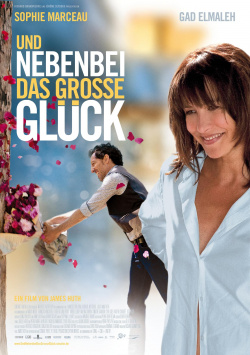 And by the way the great happiness

Jazz musician Sacha (Gad Elmaleh) leads a carefree single existence. He enjoys just being able to live into the day, and in his forty-plus years of life has never seen the need to really grow up. After all, his mother still makes sure he gets fresh laundry and something to eat. And petty affairs with attractive women are all the emotional attachment he needs. That changes abruptly when he meets the beguiling but somewhat clumsy Charlotte (Sophie Marceau). He falls head over heels in love with the woman, whose role as mother and still-wife to big industrialist Alain Posche (Francois Berléand) keeps her feet firmly planted in life. She doesn't need an irresponsible bon vivant like Sacha, even though she quickly succumbs to his charms. And so the musician has only one choice: he must finally grow up. But unfortunately it is not so easy to break with old habits...

And by the way the great happiness is pure good mood cinema from France. The film pairs comedian and actor Gad Elmaleh, who is extremely popular in his homeland, with the charismatic Sophie Marceau in a comedy that doesn't even try for profundity, but just wants to entertain well. With a mixture of delightfully silly slapstick, lots of physical comedy and plenty of romance, this couple quickly conquers the hearts of the audience. It's not a big deal that not every gag hits the mark. Especially in the first few minutes the film needs a bit to find its rhythm. The humor seems a bit strained and stilted. But as soon as Charlotte Sacha literally falls in front of the feet, the action picks up speed and delivers many really funny, but also very nice moments, which result in a coherent overall picture in the end.

Particularly positive is that the chemistry between Gad Elmaleh and Sophie Marceau is just right. The two harmonize perfectly on screen, so that the romance of the rather dissimilar couple seems absolutely credible. This is extremely important, especially in view of the sometimes somewhat exaggerated claptrap, because otherwise the romantic scenes would have lost a lot of their effectiveness. But this way you can have fun with the couple, but at the same time you can sob with them.

The other actors are unfortunately a little bit lost. This is especially a shame with Francois Berléand, as his snobbish portrayal of Charlotte's superficially emotionless ex, but inwardly seething with jealousy and wounded pride, is really great in its own right. But he just can't compete with the concentrated charm of Sophie Marceau and Gad Elmaleh. However, this doesn't really have a negative effect on the overall picture any more than the minor dramaturgical weaknesses of the script. The bottom line is that Und nebenbei das große Glück is a simply beautiful, funny and endearing film that can be highly recommended to friends of romantic comedies from France. Worth seeing!

Cinema trailer for the movie "And by the way the great happiness (Frankreich 2012)"
Loading the player ...