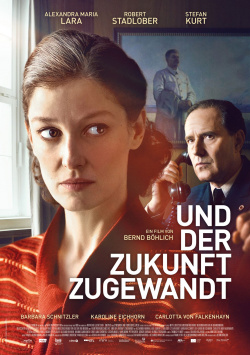 And facing the future

For ten years Antonia (Alexandra Maria Lara) has lived with her young daughter in a Soviet labor camp. In 1952, politicians in the GDR manage to bring her to the German Democratic Republic along with her sick daughter and two fellow prisoners. Here she gets the chance for a new beginning. The only condition: The women must keep silent about what was done to them in the Soviet Union. Antonia is prepared to pay this price - for herself, for her daughter and also for the GDR. But although on the surface everything turns out well, Antonia has to realize that the past cannot be hushed up.

And Facing the Future tells a gripping story based on true events. Director Bernd Böhlich, however, could hardly fall back on archive material during his research, as there is no literature about this dark chapter and those involved strictly adhere to their vow of silence. Nevertheless, the story told in this drama feels authentic and harrowing. The bleak imagery contributes much to the coherent atmosphere that Böhlich's production builds. And the ensemble, most notably Alexandra Maria Lara, delivers very strong performances indeed.

Netheless, the film only partially succeeds in unleashing the power that is actually inherent in this story. This is due to the fact that the narrative pace seems very ponderous and the moments that should actually be particularly emotional, somehow sober and undercooled come across. Moreover, the narrative jumps again and again into the future to the day of the fall of the wall, which in the end somehow turns out to be completely unnecessary. For what is thereby revealed about Antonia is already made more than clear by her actions in the final act.

And facing the future is a very ambitious and dramaturgically also important film. But in a somewhat convulsive attempt to avoid falling into some kind of emotional kitsch under any circumstances, the production ultimately remains too detached and dreary to be able to grab the audience the way the film is supposed to do. And that's why the bottom line is that it's only worth seeing: Worth seeing with cutbacks!

Cinema trailer for the movie "And facing the future (Deutschland 2018)"
Loading the player ...