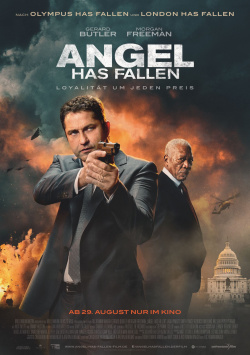 Secret Service Agent Mike Banning (Gerard Butler) gives everything in his job. When it comes to protecting the life of the US President (Morgan Freeman), Banning cannot be stopped. His body has already suffered a lot and slowly it's time for the agent to think about taking on a much safer desk job. But he doesn't come to a decision anymore, because in an attack on the president the entire Secret Service team is killed - all except Mike. Everything indicates he's behind the hit. While the president is fighting for his life, Mike has to flee from his colleagues and the FBI to find out who is really behind the attack. But time is running out for him…

"Angel has fallen" is after "Olympus has fallen" and "London has fallen" the third action-racket around the Secret Service agent Mike Banning, played by Gerard Butler. Let's be honest: The first two parts weren't really good movies - but they were really good entertainment. Especially in the second part, the logic had almost completely disappeared. But the whole thing was entertaining. Anyone who has already been disturbed by logic holes, clichés and a certain predictability in these films should immediately drop the plan to watch this third part. But if you would call yourself a "fan", you will get your money's worth here.

However, there is also a small limitation here. Just like Mike Banning's body, the film series also shows slight signs of fatigue. There are some dialogue sequences that are too tenacious, which suffer especially from the fact that the script isn't written very well. The best example for this is the fact that even an untrained viewer knows after only three seconds who the villian of the movie is. When he then drops his mask, the audience is left out of any form of surprise effect. Here it would have been better if you had chosen actors for two key roles, who you wouldn't expect to be really evil.

When action comes up, director Ric Roman Waugh delivers convincingly. Also here not quite as crashing as with the predecessors, but still entertaining. Gerard Butler does a good job as an action hero drawn by his work. "Angel has fallen" may be the weakest part of the series so far, where the weaknesses can no longer hide so well behind the furious action. But if you're just looking for solid entertainment with a good hitting factor and don't want to get too challenged intellectually, you've come to the right place. And so there is another solid one: Worth seeing!

Cinema trailer for the movie "Angel has fallen (USA 2019)"
Loading the player ...