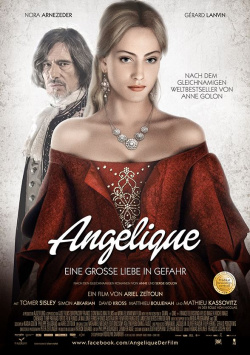 France in 1656: To save his family from the disgrace of bankruptcy, the impoverished Baron de Sanc&eacute; marries off his beautiful daughter Ang&eacute;lique (Nora Arnezeder) to the wealthy but much older Count Joffrey de Peyrac of Toulouse (G&eacute;rard Lanvin). For the self-assured young woman, this forced marriage is at first a catastrophic injustice. But over time she develops an unexpected affection for the cultured and charming Count de Peyrac, and in the end even seems to have found great happiness with him and their two children together. But then the Count becomes the victim of an intrigue that sends him to the dungeons of the Bastille and Ang&eacute;lique completely penniless on the streets of Paris. But Ang&eacute;lique has never been a woman to simply surrender to her fate. And so she begins a struggle in which a secret she has carried since childhood may play a crucial role.

A total of 18 volumes surrounding the adventures of heroine Ang&eacute;lique have been written by French author Anne Golon since 1956. The books have been translated into 27 languages and sold in 45 countries with a total circulation of about 150 million copies. The success drew not only a whole series of similarly structured historical novels, but also, starting in 1964, several film adaptations starring Mich&egrave;le Mercier in the title role. These films caused a sensation not only because of the opulent sets, but primarily because of the almost scandalous permissiveness for the time. To this day, the Ang&eacute;lique films from the 60s enjoy a certain cult status, which the remake by Ariel Ze&iuml;toun (Colombiana, Bandidas) now tries to take on.

Purely visually, the Tunisian-born director has definitely succeeded. The camerawork is convincing, the costumes opulent and the sets very detailed. And lead actress Nora Arnezeder is also pleasing to the eye, and she certainly shows off her acting talent. The actress, known from films like Maniac or The Thief of Words, is supported by a really good ensemble, from which especially G&eacute;rard Lanvin (Public Enemy No. 1) and Mathieu Kassovitz (The Fifth Element) stand out. With high show values, the good actors and a coherent mixture of historical film, drama and eroticism Ang&eacute;lique actually sounds like perfect entertainment for fans of works like The Wandering Whore or The Pilgrimess.

And it is exactly for such viewers that the film is really absolutely worth seeing. However, this remake of the first Ang&eacute;lique adventure has a very similar weakness as the comparable TV productions: The script! Because the accumulation of clichés and extremely flat dialogues takes a lot of wind out of the sails especially of the actors' effortful acting. What can be caught by Nora Arnezeder or G&eacute;rard Lavin still quite convincingly, leads for example with David Kross to the fact that his portrayal of King Louis XIV almost seems unintentionally funny. But the weak script doesn't just affect the actors' performances. Also the story itself loses tension again and again and at some point just drags on very tough. That's always nice to watch - but even cultivated boredom is not necessarily what is commonly understood by rousing cinema entertainment.

Ang&eacute;lique is most definitely not a bad film, certainly not for its intended target audience. For that, the production simply has too many positive and worth seeing aspects to offer. But at the same time a lot of potential is wasted, so that a thrilling, moving love story only turns into a very conventional schmonzette. This is still a visual treat and offers solid entertainment, but nothing more. But since at least the targeted audience and lovers of the novels are satisfied, it is still enough in the end with small deductions for a: worth seeing!

Cinema trailer for the movie "Angélique (Frankreich/Österreich 2014)"
Loading the player ...