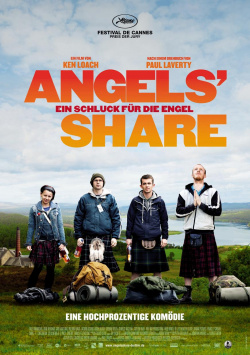 A warm-hearted comedy by Ken Loach, the master of British social realism, who always covers his stories with reality-based dreariness and has very rarely in his career directed anything resembling a comedy? It's hard to believe, but with Angels` Share - A Sip for the Angels, Loach has actually directed what is, by his standards, light material with plenty of wit and life-affirming warmth.

The story is told of Robbie (Paul Brannigan), who is on trial for assault and is given one last chance to work off his sentence with community service. The next time he commits an offence, he faces a longer prison sentence. Not a very good prerequisite for a normal family life, which he plans with his pregnant girlfriend Leonie (Siobhan Reilly). So Robbie strives to complete his community service diligently. While he gets along well with his three co-workers Albert (Gary Maitland), kleptomaniac Mo (Jasmin Riggins) and Rhino (William Ruane), and social worker Harry (John Henshaw) also sees potential in the young man, his personal environment makes it very difficult for Robbie to stay on the straight and narrow. But he wants a future for himself and Leonie at any cost. When Harry invites his protégés on a trip to a whisky distillery, he realizes that Robbie has a particularly fine sense of taste, with which he can recognize all the subtleties of different types of whisky. Without further ado, he takes him to a whisky fair in Edinburgh, where Robbie is even able to impress the cask master Rory McAllister (Charlie MacLean) during a blind tasting. Robbie finally sees some real prospects for his life and he hopes to get a job in a distillery. But when he learns that a barrel of the most expensive whisky in the world is about to be auctioned off in the Scottish Highlands, he has an idea that could provide a carefree future not only for him, but also for Albert, Mo and Rhino...

Naturally, Angels` Share - A Sip for the Angels is again laced with social criticism and gritty realism. But in contrast to most of his other films, Ken Loach breaks up the here and there still quite gloomy events again and again with wonderfully quirky humor, so that the film never seems depressing even in its drearier moments, but is always surrounded by a positive aura. Even the introduction of the characters in the courtroom is so well done, making it very easy for the audience to quickly take these social misfits to their hearts, despite their flaws and failings. While the first half of the story is primarily concerned with setting up the group dynamics and Robbie's social environment, establishing the necessity for his subsequent actions, the second half almost mutates into a Scottish Ocean`s Eleven variant that manages to please with a great deal of original ideas and amusing twists.

The film is like a declaration of love for Scotland, its people and, of course, whisky. This is presented in a way that perfectly blends sophisticated arthouse cinema with light entertainment into a palatable whole, while also leaving room for a touch of poetry in relation to the film's title. A wonderful film that not only Ken Loach fans and whisky lovers should definitely not miss. Worth seeing